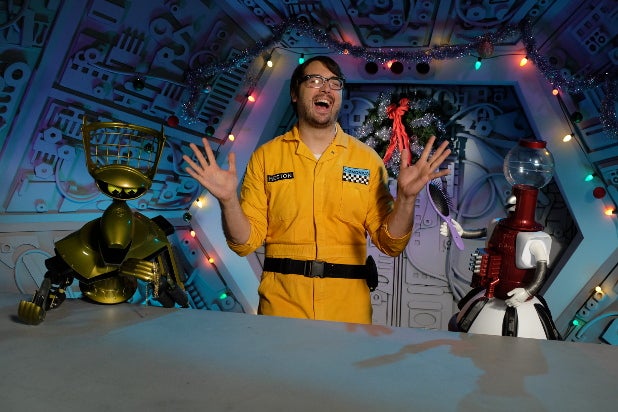 It took a little bit for Jonah Ray’s new gig to hit him emotionally, but when it did, the comedian tells TheWrap that he “teared up.”

The gig: host of Netflix’s “Mystery Science Theater 3000,” a revival of the classic 1990s comedy series that debuts this weekend on the streaming service. It marks a full circle for Ray, who cites “MST3K” as one of the reasons he went into comedy in the first place.

A cult hit during its original 10-season run on Comedy Central and Sci-Fi, “MST3K” focuses on a hapless everyman kidnapped by mad scientists, marooned in a spaceship called Satellite of Love, and experimented on by being forced to watch bad movies. With his robot companions, Tom Servo and Crow T. Robot, he stays sane by relentlessly mocking the bad films with everything from pointed criticisms to pop culture references.

Ray stars as the human test subject, a role previously filled first by series co-creator Joel Hodgson, then by former head writer Mike Nelson. But despite having watched the show religiously, going to the set for the first time, Ray says it didn’t feel quite right at first.

“It looks like the set I love but it’s three dimensional, it doesn’t look the way I knew it,” Ray told TheWrap. “I get up onto the Satellite of Love station and I’m up there, and Tom and Servo [sic] pop up — again, seeing it in three dimensions.”

But then he caught a glimpse of himself on the monitor with the two iconic robots and it hit him.

“I remember seeing me flanked by two of my favorite characters in comedy and that’s when it all kind of hit me,” he remembered. “Because everything else was like ‘Oh it feels like MST’ but, I don’t know, more like I won a competition or a contest. So that’s when it hit me and I teared up. It was really, really crazy.”

Best known for the “Nerdist Podcast” and the Comedy Central show “The Meltdown with Jonah and Kumail,” Ray cites the “punk rock” ethos of the show’s original era as a big inspiration.

“There’s something very punk rock about that era of ‘Mystery Science Theater’ and ‘Kids in the Hall,’ it feels like these guys were just doing it,” he said. “Nobody gave them permission they were just going to do it themselves, it’s that DIY aesthetic that I really loved about.”

The show’s still got that DIY feel to it as well. True to the original incarnation, the production look B-movie cheap (although not on purpose, Hodgson says), with the robots deliberately obvious puppets, and the set looking like it might fall apart at any moment.

But a couple things are updated. Ray’s jumpsuit is yellow instead of red or green, and the robots are voiced by different actors, among other modern touches.

There are people still in a trench behind the desk where the host stands and people a few feet away with remote controls, moving and performing as the robots. Hodgson isn’t the host (and hasn’t been since 1993), but he’s still working behind the scenes and he was there for Ray’s introduction to the position.

Hosting the show is an oddly isolating experience, according to both Hodgson and Ray. You’re the only person standing and fully performing on a set. The host/test subject interacts with the mad scientists (played in this incarnation by Felicia Day and Patton Oswalt) only through a monitor. Ray visited set when Day and Oswalt were filing their scenes but for the most part, he was alone. That’s when Hodgson became the dad.

“I had a lot of feelings about it and they didn’t really manifest until Jonah was in that spot,” Hodgson said. “Personally, I just felt really protective of him because nobody gets how hard it is to do that part except me, Mike and Jonah.”

Hodgson and Ray met when Hodgson was guesting on the “Nerdist Podcast” and became friends, so when the gig was available, Hodgson offered it to him and as he said, it was a “lifelong dream come true.”

“Mystery Science Theater 3000” is now available to stream on Netflix.