Josh Sapan is stepping down as AMC Networks president and CEO and transitioning to an executive vice chairman role, and former Showtime Networks chief Matthew Blank has joined the company as interim CEO.

Sapan, who is now 70, has been president and chief executive officer of AMC Networks for 26 years. When he joined back in 1995, AMC Networks was still known as Rainbow Media, a subsidiary of Cablevision.

Sapan oversaw the company through many significant transitions, but one in particular certainly stands out.

When Sapan joined, AMC was American Movie Classics. The company stuck with that approach for a while, but later moved away from re-airing classic films and into original programming. Eventually, AMC brought us “Mad Men,” “Breaking Bad” and “The Walking Dead,” a trio of dramas that feature prominently in any history of modern-day television.

The company said it is conducting a search for Sapan’s permanent replacement. Blank, who is already in the Dolan family business as a board member of the Dolans’ MSG, stepped down from that position for this gig.

“This has been the greatest career I could have ever imagined, and I am enormously proud of all that we have accomplished. I am deeply grateful to Charles and Jim Dolan for allowing me this spectacular opportunity,” Sapan said in a statement on Tuesday. “There has perhaps been no more exciting time for the company than right now and, as executive vice chairman, I look forward to continuing to work with the outstanding team at AMC Networks, as well as Matt, my great colleague and friend, to focus on how we maximize our unique content to accelerate our streaming goals.” 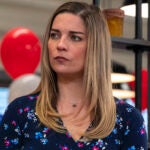 AMC Networks Chairman James Dolan added, “Over his long career, Josh’s leadership ensured AMC Networks became a force in entertainment, with far-reaching influence throughout the industry, and home to some of the most successful and innovative shows in the history of television. We are grateful for his vision, creativity and management expertise and look forward to his continued contributions as executive vice chairman.”

Dolan also offered praise for Blank for assisting in the transition to new leadership. “We are also delighted to have Matt help us through this transition,” Dolan said. “His wealth of media experience will prove valuable as he works with Josh and the AMC Networks team to support the company’s continued success.”