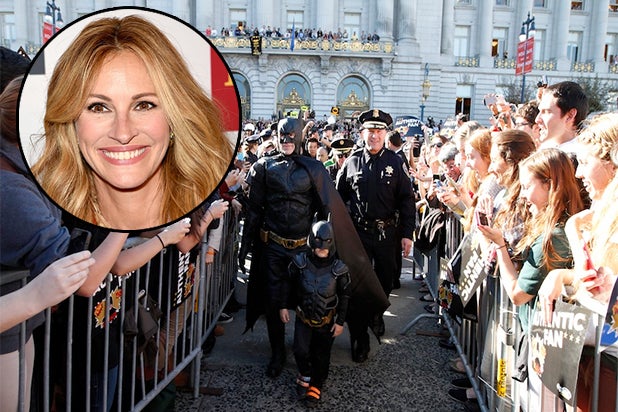 Julia Roberts is attached to produce and star in a feature remake of the documentary “Batkid Begins: The Wish Heard Around the World,” it was announced Friday. The doc is scheduled to have its world premiere at the Slamdance Film Festival on Saturday.

Produce alongside partners Lisa Gillan and Marisa Yeres Gill through their Red Om Films banner, the film tells the real life story about how a Make-A-Wish event for Miles Scott — a 5-year-old boy diagnosed with leukemia — that made him Batman for a day turned into not only a citywide spectacle with over 25,000 San Franciscans turning out, but a worldwide phenomenon on social media with nearly two billion participants.

The documentary’s director, Dana Nachman, will serve as Executive Producer along with Josh and Dan Braun of Submarine under production company’s new remake label Sub/Version.

“It’s thrilling to me that Ms. Roberts and her team watched our film and were so moved by it that they want to dedicate their time and creative capital to make sure the widest audience possible will know and love Miles’ story and the spirit of this intimate special event that went global, as much as we do,” said Nachman in a statement.

CAA brought the project to Roberts and brokered the deal with Sub/Version, and will represent the package.

Roberts won an Oscar for “Erin Brockovich” and most recently starred opposite Meryl Streep in “August: Osage County.” Roberts is also attached to star in Billy Ray’s remake of the Argentine thriller “The Secret in Their Eyes” and George Clooney‘s “Money Monster.” She’s repped by CAA and Hirsch Wallenstein.