“Jupiter’s Legacy,” Netflix’s superhero epic from Mark Millar, has a lot of story to get through, given that it spans multiple generations of superpowered people over the course of 90 years. And the eight-episode Season 1, which debuted Friday, only scratches the surface of Millar’s sprawling comic book story.

That’s largely because half of each episode is dedicated to tracking the origin of Josh Duhamel’s Sheldon Sampson, aka The Utopian, and his soon-to-be-superpowered friends who make up The Union. The group’s backstory — which begins with the Stock Market crash of 1929 and ends with their journey to a mysterious island where aliens grant them special abilities — is only a very small part of the comic books, which mostly focus on The Union in the present day and their kids who struggle to live up to a changing world and their parents’ ideals.

The TV version, however, tells both stories simultaneously in an ode to one of the greatest films to ever employ a dual-timeline structure.

Also Read:
With ‘Jupiter’s Legacy,’ Netflix Finally Has Superheroes of Its Own

“What [original showrunner] Steven DeKnight suggested, which I think was a really excellent idea, was instead of starting in 1929 and running chronologically, use the ‘Godfather II’ structure of going back and forward. You have Michael Corleone and Vito Corleone’s story being told at the same time,” Millar told TheWrap. “The ‘Godfather II’ structure shows the father and the son at the same age. And that’s the same thing that’s been done here, to show the young characters and the old characters at the same age and essentially making the same mistakes.”

The first season of the Netflix series is largely based on Millar’s 10-issue comic “Jupiter’s Legacy,” with potential future seasons likely to incorporate the 12-issue prequel “Jupiter’s Circle” and the upcoming sequel run “Jupiter’s Legacy: Requiem.” Millar said that when he wrote the “Jupiter’s Legacy” comic series, he chewed through plot because his writing timeline was very condensed in order to fit with Frank Quitely, his preferred illustrator’s, own schedule.

“The comics I wrote at a breakneck pace,” Millar recalled. “I would rattle through things really fast, which actually worked really well for the comics.”

As such, Millar said they probably only got through the first two issues of “Jupiter’s Legacy,” plus “a few things taken from other issues,” in the first season of the Netflix adaptation. “And so we’ll get tons of material to get through in future seasons if we’re lucky enough to have them,” he added. 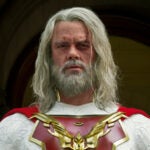 With so much more plot from the comics left to explore, the first season of “Jupiter’s Legacy” largely serves as an eight-episode setup for the series, as it tracks the story of Duhamel’s Superman-esque The Utopian and his son Brandon (Andrew Horton), aka Paragon, and daughter Chloe (Elena Kampouris). Along the way, the present-day storyline focuses on the current generation of superheroes, most of whom are the offspring of the elder generation known as The Union. Meanwhile, the past storyline follows Sheldon and his brother Walter (Ben Daniels), who are dealing with their father’s suicide in the wake of their steel company going under amid the start of The Great Depression. After Sheldon has visions of his dead father that include a mysterious island, he gathers a group of individuals, whom he sees in those visions, including Walter, journalist Grace (Leslie Bibb) and his friend George (Matt Lanter).

As for what potential future seasons may have in store, Millar said they’re likely to keep the same dual-timeline structure — meaning “Jupiter’s Circle,” a 12-issue comic run that takes place in the 1950s and ’60s and chronicles the early days of The Union, would probably be incorporated.

“Yeah, I think that narrative structure, once you establish that, it’s very difficult to step away from that,” Millar said.