Karamo Brown is the newest face in daytime this Monday when “Karamo” debuts, and the talk show host is quick to give praise to his Netflix series “Queer Eye” for being one of the many stops along his journey that helped him prepare for this moment.

“One of the things that I give full credit to for ‘Queer Eye’ is that it allowed me to hone my skills and being able to give you real, sustainable, chunky, juicy advice that is not full of fluff, but in a concise moment,” Brown said.

In fact, shortly before he hops on the phone with TheWrap, Brown was filming an episode of his program where he imparted advice in just that manner — advice that was able to make an impact on a guest who was having trouble seeing eye-to-eye with their mother.

“I was, like, you need to understand this one concept: impact versus intention. Your intention might be one thing, but the minute that someone says it impacted me a certain way, your intention goes out the door,” Karamo explained. “So you keep saying to them, it’s not my intention because you’re not listening to the impact, because you don’t want to listen to the impact. 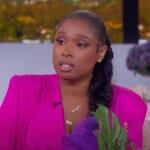 Also Read:
Jennifer Hudson Doesn’t Regret the Song Choice That Led to ‘Idol’ Elimination: ‘It Led to Me Getting ‘Dreamgirls,’ Honey!’ (Video)

“And you go to therapy for years to get that one,” Karamo said with a laugh. “He learned that lesson so quickly and he was, like, ‘Oh my gosh, I get it now.’ And that’s what I mean. I’m not going to give people fluff; I’m giving them the real-real but it has real real depth to it.”

But on “Karamo,” the host doesn’t just stop with an a-ha moment; he knows when to add in a light-hearted bonding moment.

“Karamo,” from NBC Universal Syndication Studios, will see the host bringing his personal experiences (he used to work in social services) as he connects with his guests. He will address a variety of topics including infidelity, race, parenting and complex family dynamics.

Brown takes inspiration from his life experiences, but also from the hosts he grew up watching on television as a kid, including Oprah Winfrey, Phil Donahue and Montel Williams, all of whom he used to record on a VCR.

“It made me feel connected,” Brown said of watching those shows. “And so what I take from them is, first of all, the fun. Every single one of them, though they were talking to everyday people, they all had fun. And I like to laugh and I like having a good time. I also take the heart and empathy from each of them. And then, what I love about Oprah and Montel, and even Donahue in his days, they all have swag, and let me tell you something, I’m gonna be coming cute. I’m going to be coming out here with an outfit … I want to look nice.”

But though he is hosting his own show, this doesn’t mean he has any plans to exit “Queer Eye.”

“Listen, as long as Netflix wants to take us back – we’re in the middle of shooting right now and I’m doing both. And I do not want to give up those four yahoos for anything because I love them so much,” he said of his “Queer Eye” cohosts Antoni Porowski, Tan France, Bobby Berk and Jonathan Van Ness.