It’s been almost 20 years since Jennifer Hudson was eliminated from “American Idol,” but at this point, she has no regrets about her final song choice. The singer told her former judge Simon Cowell that the song that got her eliminated from the show is actually the reason she got her breakout role in “Dreamgirls,” which then earned her an Oscar.

Hudson kicked off her new talk show “The Jennifer Hudson Show” this week, welcoming Cowell as her first guest. During their conversation, Hudson asked for his perspective on things from the night she got booted from the competition. Cowell noted that he wasn’t a fan of the theme for the week — “Barry Manilow Week” — and wished that it had been different, so Hudson could’ve sung a song more suited for her.

Cowell then turned the table on the host, asking whether she even would change the song, if given the opportunity to do everything over again.

“No, but it’s other songs before that that I would’ve changed,” Hudson said. “Because that song, little do you know, it led me to getting ‘Dreamgirls’ honey! Because it was structured — Barry Manilow structured that song as if it was ‘And I Am Telling You,’ and a lot of people thought that’s what I was singing.” 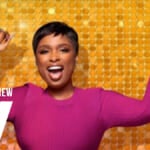 Also Read:
‘The Jennifer Hudson Show’ Producer Promises Music – Just Not How You Might Expect

For those who don’t remember, that song was “Weekend in New England.” You can watch her performance of the song in the video below.

Hudson went on to note that some of the songs she sang at the beginning of her run on “American Idol” were ones that “I don’t feel like that represents my artistry.” She didn’t name names on the songs, but added that “Circle of Life” was another song that she definitely did not regret.

“By the time I was eliminated, I felt like I got an opportunity to display who I was as an artist, so I was OK with being eliminated,” Hudson said.

You can watch Hudson’s conversation with Cowell in the video above.