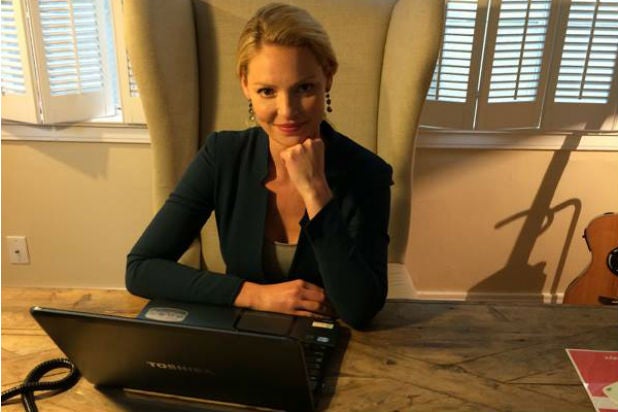 Fans had questions. The top CIA analyst from NBC’s “State of Affairs” answered.

Katherine Heigl, 36, participated in a live Q&A with hundreds of fans who watch her as Charleston Tucker, a CIA agent tasked with briefing the President (Alfre Woodard) on security threats to the nation.

From hinting at a possible movie sequel with Josh Duhamel, to being OK with having a “brother husband,” Heigl held nothing back.

1. What kind of training she does for her role as Charleston Tucker.

“I have the very good fortune of working with two of our executive producers who are ex-CIA, and they provide a tremendous amount of support, info, and guidance! I also work with dialect coaches to learn the different languages, and tomorrow I’m headed to the gun range to practice my shooting skills…”

2. Whether she would do a sequel for “Life As We Know It” with Josh Duhamel.

3. Which is harder: being a CIA agent or a mom.

“Mom at home!! Playing a character on TV or in film can be demanding and stressful, but nothing matters more to me than being a good mom, so the pressure of that role far outweighs everything else I do!!”

4. In what kind of shape she starts the day.

Hmmm…probably more hazy and out of it! My daughters know that I’m good for nothing until I’ve had my first cup of Yerba Mate!

5. Who she would choose to make a guest appearance on “State of Affairs.”

“I would love my good friend T.R. Knight! We would have the time of our lives I just know it!!”

6. Her receptiveness to marriage requests.

“Would you mind having a brother husband?” Heigl responded.

7. Whether it took her one or two takes to film the truth serum scene.

“Oh lord no! That took hours to film! But I love you for thinking I could pull it off in one take!”

8. Whether “State of Affairs'” portrayals of Muslims are negative, after a fan expressed her husband’s refusal to watch it for that reason.

“I would tell him to be patient and see how the season unfolds…we aren’t portraying Muslims negatively but rather terrorism in all forms…Charleston is trying to protect the ideals of the Muslim religion by eradicating those who hold it hostage.”

Also Read: Katherine Heigl’s ‘State of Affairs': Why Networks Are in Love With Power Women Shows

9. The hardest thing about filming “State of Affairs.”

The ops center scenes. We tend to film all those scenes in one day and it’s a small room with only one direction for the actors to be looking in, so it’s hard to keep it fresh and exciting. The rest of the cast makes it incredibly fun and they keep spirits high with their sense of humors and camaraderie! We’ve also started playing the game Movie Star/Movie and that keeps us entertained for hours!

10. Her advice on adoption.

“I would say that having children, no matter how you choose to do that, is the most rewarding, challenging, and joyful experiences of a mother’s life. Adoption can be a long and strenuous experience, but so very very worth it in the end! Just stay patient and purposeful! I wish you luck and love on your journey!”

From “Gotham” to “State of Affairs,” the freshman programs that will be contributing to the butt-groove in your couch over the coming months

"Red Band Society" (Fox): A diverse group of teenagers become unlikely allies and friends in this unconventional and, at times, comic high school drama, set in the pediatric wing of a hospital. This is one of the most ambitious and unorthodox shows in anyone's development slate this year. It represents a completely inspired way into young soap, a comedic one-hour, a hospital show, and a (surrogate) family drama.
View In Gallery