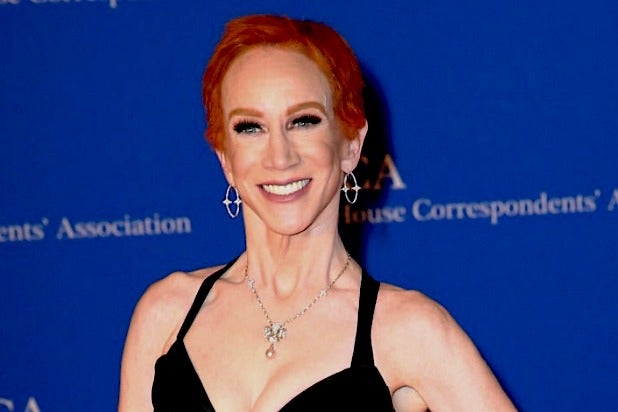 Being placed on a “kill list” apparently isn’t deterring Kathy Griffin from speaking her mind about the First Family.

The former “My Life on the D-List” star took a poke at Melania Trump on Tuesday for calling a photo seeming to depict Griffin posing with the decapitated head of President Trump “very disturbing.”

The jab came with a seeming dig at the Be Best children’s campaign unveiled by the Melania this week.

It also came accompanied by an Associated Press tweet from last year bearing the headline, “Melania Trump: Kathy Griffin’s video ‘very disturbing,’ ‘makes you wonder about mental health of person who did it.”

“#BeBest – When your husband is an erratic whack job who tweets crazy s— and actually puts the country in danger and you take the time as First Lady to question a photo of a comic holding a halloween mask and ketchup,” Griffin’s reply read.

Last May, after the photo made headlines, Melania Trump reportedly issued a statement reading, “As a mother, wife, and a human being, that photo is very disturbing. When you considering some of the atrocities happening in the world today, a photo opportunity like this is simply wrong and makes you wonder about the mental health of the person who did it.”

The fallout over the photo was considerable for Griffin, who was dropped from her annual gig co-hosting CNN’s New Year’s Eve coverage. After apologizing for the photo, Griffin later withdrew her apology.

On Monday, Griffin informed her Twitter followers that she “just found out that I’m on a brand new “Kill List.”

In a multi-part vent on the social-media platform, Griffin wrote, “I just found out I’m on a brand new ‘Kill List.’ Constant death threats and threats of violence toward me in very specific ways. None of the social media platforms I need to make a living and sell my tour tickets will step in and help at all.”

#BeBest – When your husband is an erratic whack job who tweets crazy shit and actually puts the country in danger and you take the time as First Lady to question a photo of a comic holding a halloween mask and ketchup. https://t.co/xVXM0s1YVD