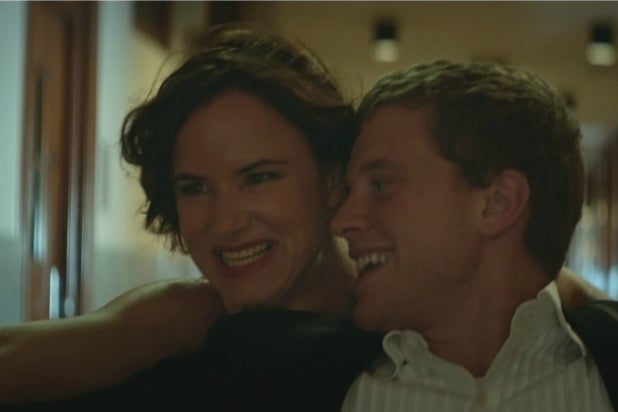 Personal responsibility seldom seems to be the focus (or lesson) of romantic comedies, much less relationship dramas, which may be why “Kelly & Cal” feels so fresh and different.

Directed by Jen McGowan from a script by Amy Lowe Starbin, the film takes a familiar scenario — two uncomfortable people find comfort from each other — and renders it in sensitive, human dimensions. And with the help of terrific performances by Juliette Lewis  and Jonny Weston (“Chasing Mavericks”), “Kelly & Cal” never fails to recognize that the solutions to life’s problems are usually as unglamorous as the circumstances that make them necessary.

Lewis plays Kelly, a new mom struggling with the challenges of taking care of a baby, a task made all the more difficult due to the grinding work schedule of her husband Josh (Josh Hopkins of TV’s “Cougar Town”). After trying and failing to make friends with some of the other moms in her neighborhood, Kelly crosses paths with wheelchair-bound teenage neighbor Cal (Weston), who’s feeling his own sense of constraint.

The two oddballs strike up an unusual camaraderie; Cal provides her with a reminder of her younger, wilder days, and Kellay offers him with much-needed, unsentimental companionship. As they grow closer, however, Kelly begins to realize that her flirtation with youthful irresponsibility actually has consequences, and she soon finds herself juggling the responsibilities of a fragile marriage she wants to preserve and a tenuous romance she wants to revert to a friendship.

The idea of new parenthood is hardly a novel subject for a movie, nor is the disillusionment of adulthood, although typically these challenges are foisted on poor young husbands rather than their mostly-capable, put-together wives. First-timers McGowan and Starbin literally flip the script, making Kelly a female manchild, nostalgic for her reckless, “fun” adolescence, emotionally unprepared for parenthood and completely lost amidst the mundane duties of child rearing.

Lewis is ideally cast in the role, bringing her own eclectic history as an actress along with the substantive loneliness she gives the character, an island of rock & roll cool in an ocean of suburban affluence. The evolution of her attraction to Cal — mostly platonic but, starved for attention from her husband, occasionally flirtatious — never overshadows the truth that she is married and wants to stay that way.

As Cal, meanwhile, Weston skillfully avoids sentimentality, even amidst the laundry list of his achievements prior to the accident that cost him the use of his legs. A kid just smart enough to get himself into trouble and just desperate enough to interpret Kelly’s friendship as something more, Weston makes Cal a fully dimensional counterpart, especially once he starts choosing inappropriate ways to express his interest in his lonely neighbor.

At precisely the moment when the audience might be asking why Kelly can’t just talk to Josh, she thankfully starts wondering that too. McGowan and Starbin never let either of them skate past their problems with an easy turn of phrase or superficial solution, which is ultimately why “Kelly & Cal” ranks among the more honest films about adulthood, much less parenthood, made in recent years.

It’s a film that takes its characters and their crises seriously, allowing them to fully explore their situation before providing them (and the audience) a genuine roadmap for finding their way through.