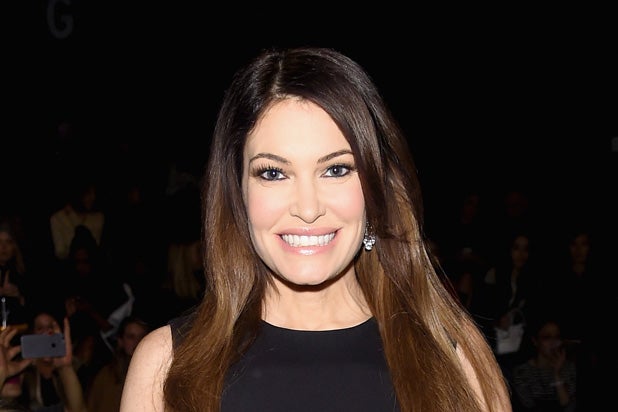 Kimberly Guilfoyle lawyer’s have sent threatening legal letters to the HuffPost for reporting that she was accused of sexual harassment before she exited Fox News, and to several other news outlets that reported on the HuffPost story.

Ali reported that six Fox News sources said Guilfoyle had showed photos of “male genitalia” to her network colleagues and discussed “sexual matters at work.” Ali’s story, which cited 21 sources, also said insiders had described her as “emotionally abusive” towards hair and makeup artists at the network.

“Let us be perfectly clear,” Clare Locke attorneys Thomas Clare and Joseph Oliveri wrote in a letter to TheWrap. “Any assertions that Ms. Guilfoyle engaged in any inappropriate work-place conduct are unequivocally baseless, demonstrably false, and defamatory.”

“This letter further serves as a formal, written demand that you immediately retract your Article that repeats and republishes the false and defamatory statements and implications originally published in the Huffington Post Article,” they continued.

“We have already sent The Huffington Post and Mr. Ali a pre-litigation document hold request, and we will not hesitate to take action if you do not retract your false and defamatory Article about Ms. Guilfoyle … Your failure to do so will constitute evidence of your actual malice in publishing the Article.”

HuffPost, TheWrap and Slate did not retract their stories.

Reps for Guilfoyle and Clare Locke did not respond to requests for comment.

Ali wrote that he and HuffPost were first contacted by Locke Clare attorneys after an earlier July 20 story about Guilfoyle. “Saying that my story had false and defamatory claims and that if the story wasn’t retracted it would constitute evidence of ‘actual malice,'” he tweeted on July 23, adding, “The story is accurate.”

1. Kimberly Guilfoyle has retained the law firm of Clare Locke & sent a threatening legal notice to HuffPost and me. Saying that my story had false and defamatory claims and that if the story wasn’t retracted it would constitute evidence of “actual malice.”(The story is accurate) https://t.co/jKQ5CcFW4s

Still, The Inquisitr retracted its own story based on HuffPost’s reporting: “The Inquisitr’s editorial team offers this full and frank retraction of this story and apologizes for any duress Ms. Guilfoyle may have experienced as a result of this repeated story,” reads an explanation posted to the site.

It’s not the first time that coverage of Guilfoyle has prompted a reaction. The New York Observer — which owner Jared Kushner placed in a family trust last year after taking a White House job for father-in-law Donald Trump — amended a July 5 article highlighting a photo Guilfoyle took with “Pizzagate Conspiracy Theorist” David Seaman.

Seaman’s involvement in promoting the spurious theory of a Clinton-connected pedophile sex ring in the basement of a Washington, D.C., pizzeria has been well-documented.

While the article remained on the site, an editor’s note was added. “A previously published version of this article stated that Kimberly Guilfoyle ‘pow-wowed’ with David Seaman,” it read. “The article has been updated to reflect that taking a photo with someone does not necessarily imply further discussions or exchanges of ideas that would constitute a pow-wow.” (A rep for The Observer did not respond to a request for comment.)

The matter, however, didn’t end there. Not long after the correction, the story was picked up by Breitbart, which published on-the-record accounts from Sean Spicer and Sebastian Gorka attacking the piece.

The story also included a quote from an individual described as “a source close to Trump, Jr., and Guilfoyle”: “Is it too much to ask for a publication to tweet out the corrected story with an apology when they get something so wrong? It’s a clear example of why so many people no longer trust the establishment media.”

Both Guilfoyle and Trump Jr. swiftly retweeted the Breitbart story after it was published. 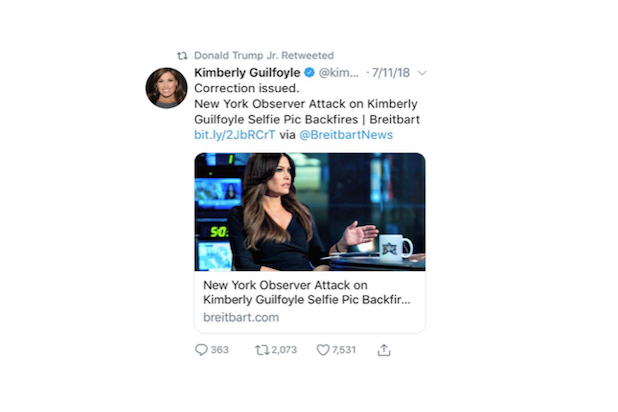 Clare Locke has a colorful history in media circles, boasting to clients such as #MeToo targets Glenn Thrush and Matt Lauer about its ability to “kill stories,” according to The Daily Beast.

The Beast also reported that Clare Locke had been retained by embattled “60 Minutes” boss Jeff Fager in an effort to water down this Washington Post investigation into what he and others knew about the accusations of sexual misconduct swirling around ousted CBS News broadcaster Charlie Rose.