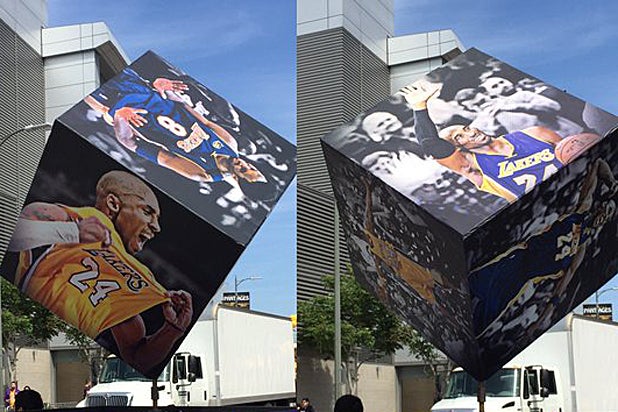 As Los Angeles Lakers legend Kobe Bryant prepared to play his last home game — fans, admirers and just about anyone who has ever watched basketball shared their fondest memories to bid the Black Mamba farewell.

The hashtag #MambaDay — referring to Bryant’s nickname that was inspired by Quentin Tarantino‘s “Kill Bill” — was a top trend on Twitter all day, and long before A-list guests took their seats at Staples Center in downtown Los Angeles for the 7:30 p.m. PT tip off against the Utah Jazz, dedications were flooding social media.

“I’ve enjoyed every minute of your career.#ThankYouKobe for all of the fantastic memories!” fellow Lakers great Magic Johnson wrote on Twitter.

“Have a great night, @kobebryant! Thanks for the memories. Looking forward to the future,” Bill Clinton wrote, while current president Barack Obama posted: “Big night of basketball – @Warriors chasing 73 and a farewell for an all-timer, @KobeBryant. NBA fans feeling like,” along with a hilarious GIF of him doing a happy dance.

“At the God’s last game,” Kanye West boasted, with a photo of his ticket.

Born in Philadelphia and raised partly in Italy, where his father played basketball, Bryant was adopted as an honorary Angeleno in 1996 at age 17 when he was acquired by the Lakers from the Charlotte Hornets in the NBA draft.

Almost 20 years, five NBA championships and 18 trips to the NBA All-Star game later, the 37-year-old is finally hanging up his signature Nikes after announcing via the the Players’ Tribune last November that this would be his final season.

While Bryant’s career has not been without controversy — including a 2003 sexual assault case in Colorado that was eventually dropped by prosecutors and a high-profile feud with former teammate Shaquille O’Neal (who was spotted courtside Wednesday) — and the Lakers are ending one of their worst seasons in team history, Kobe was a given a sendoff fit for a king this week.

See the reactions to the NBA icon and Olympic gold medalist’s farewell game below.

Have a great night, @kobebryant! Thanks for the memories. Looking forward to the future. #MambaDay pic.twitter.com/KAHTX0tDHI

Big night of basketball – @Warriors chasing 73 and a farewell for an
all-timer, @KobeBryant. NBA fans feeling like: pic.twitter.com/hvno2ZO5b0

At the God's last game pic.twitter.com/eucluEFOFX

His legacy? A champion whose contributions to the game won't ever be forgotten. Best of luck with what's next, @kobebryant. #MambaDay

congrats on ur amazing career @kobebryant !! hmu next year when we both hav 2 much free time LOL! #MambaDay #realrecognizereal

.@kobebryant I've enjoyed every minute of your career. #ThankYouKobe for all of the fantastic memories! #MambaDay pic.twitter.com/W6X0S9kdOu

Nothing but LOVE for Kobe, but I'll still break that old man's ankles… #LegendsLiveOn @NBA2K https://t.co/yCjCo8CiVy

A spinning cube of great Kobe moments outside of Staples Center. https://t.co/JBfqufVoaf pic.twitter.com/kBo6TqRadz

No one ever was going to be The Next Michael™, but Kobe came damn close. pic.twitter.com/5MXH0n8nXu

There's no way I would miss @kobebryant's final game. https://t.co/hOFfQaKa5c

From LeBron James to Kevin Durant, today's @NBA stars share how Kobe Bryant inspired them to be great! #ThankYouKobehttps://t.co/7FzXokOrds

Throwback on this #MambaDay when @kobebryant shot his first solo @SportsCenter spot with @StuartScott and I. pic.twitter.com/3t2PueSdja

Lakers put an #8 & #24 on the Staples Center court tonight pic.twitter.com/PPShBVhDfi

Kobe finishes with 15 points at the end of the first quarter pic.twitter.com/8465kTwJqz