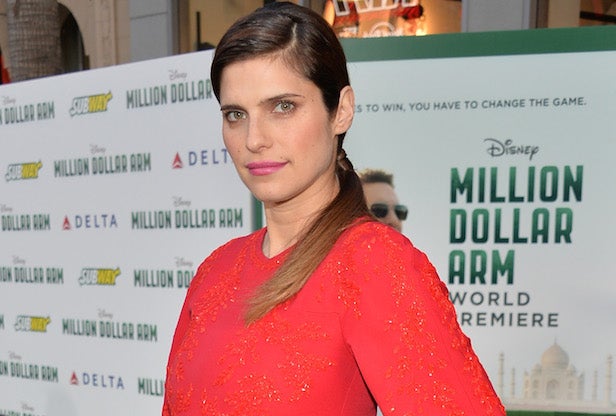 Sure, Lake Bell is now a critically acclaimed filmmaker, but acting is still her first love.

It would have been easy for the New York native to decide to make the switch to full-time writer-director after the success of her debut comedy, “In a World,” which won her a screenwriting award and a Grand Jury Prize nomination at Sundance last year. But Bell has been acting since 2002, when she broke through with a few episodes of “ER.” So while she formulates her next project as a director, she’s making sure to stay busy with jobs in front of the camera.

Her growing resume includes this weekend’s “Million Dollar Arm,” Disney’s multicultural baseball movie starring Jon Hamm as JB Bernstein, a desperate sports agent who heads to India in an attempt to find kids who might throw hard enough to make the Major Leagues. Bell plays the med student who lives in Bernstein’s guest house and puts him in his place… and then of course, forms a romantic connection with him. And it’s a true story!

Having now directed a movie, did it help with knowing what [Craig Gillespie] wanted or needed, or how the day was going?
Yeah, absolutely. I understand how long a set up is going to take. Most likely I can kind of understand how a director is going to cover a scene, so I know how many hours that’s going to be, and if the estimates I’m getting are realistic or not. But there’s also a nice camaraderie now, since I’ve directed I feel that the directors I’ve worked with when I’m in front of the camera have been generous in spirit about letting me in on what they’re working on, talking about lenses and tableau, things like that. It’s fun to kind of talk shop and continue my sponging of knowledge as I take on jobs as an actor.

A lot of your scenes were in one place, too, a very small film for you.
It was pretty contained for my character. I’m kinda bummed about that because I would have loved to go to India. They all complained about India, getting sick and it being 120 degrees, and I was like, but you got to go to India!

Did you at least get to keep your mini Taj Mahal [a gift from Bernstein in the film]?
No, I didn’t get to keep my Mini Taj! Goddamnit, I thought that was going to be a wrap gift.

Was how the movie would appear to people around the world — especially India — part of discussions you were in? It’s sort of unique in its structure.
It’s a very American movie in some respects, just because it’s obtaining the American dream. But there is something inherently international about it, because it is about a vastly different culture being injected into an American institution. It kind of plays to both sides, and I think that’s definitely why I think it’s playing successfully, because it’s incredibly universal in that way.

You’re the first person, especially a woman character, to put Jon Hamm in his place on screen since he began starring in “Mad Men.”
I know, I called him out on his shit. It was pretty fun. Craig really wanted that. Initially, the attitude and energy that I had going into it was slightly more playful — stern but playful — and he kept pushing me to give him some real guff. It was fun and also a testament to Craig’s decision to sort of architecturally form her character, within the construct of the whole movie and understanding that that’s what you needed. It was really kind of exciting to see that that was the version he went with.

You took a role that could be one-dimensional or a plot device, and made it fuller and a more complete character. How do you go about doing that?
It’s also in the page because I think Tom McCarthy really wrote a sort of complicated and layered and rich character for a peripheral character, that’s a testament to his writing. All his supporting roles are rich and I think that’s what makes an effective, full-blown piece. The whole piece benefits from having every single character, no matter how small or supporting or big for that matter, as long as they’re realistic and rich. I know he spoke to JB extensively. He did so much research about this project and trying to respect the truth and attitude of the people he was depicting. I think Tom McCarthy kind of helped, definitely gave us a leg up in that.

Being a native New Yorker, are you a Mets or Yankees fan?
It is a loaded question. I’m not a huge sports person, but I will say that just by default in my family, I was sort of born into being a Yankees fan. There’s nothing I can do about it, it’s just built in.

You sound apologetic.
I love them because it’s a family issue, but I don’t know anything about them. I don’t know squat about baseball. I just know that, if asked, I need to say Yankees.

So now what? You must be acting yourself? What’s next, whether it’s directing someone else’s script, acting in your own movie…
From the get go, it becomes all those conversations that you’re talking about, there’s all different cocktails to take on your next move. I have three different projects that I’m nurturing myself to direct. Those things are in different stages of development, I don’t know which one will come up first, but I have great respect for the process of making movies. I want it to take as long as it needs to take in order for it to be something to be proud of. Right off the heels of “In a World,” could I have directed like 7 movies? Sure, but I also need to breathe. And as an actor, too, it provided a lot of opportunities. So I took those opportunities. Because I am an actor first and foremost, I will always enjoy doing that and always learn from being on other people’s sets.

I don’t look for huge budgets anyway, it’s the opposite, I never want to create movies in an environment that’s fear based, I don’t want too much money, I don’t want to feel like everyone’s freaking out about it. I am happily careful about making the right choices and keeping it an enjoyable process versus being a stressful one.