In a move that can only be described as “Larry David-esque,” HBO Max has postponed the planned two-part Larry David documentary from release hours before it was supposed to premiere.

“The #LarryDavidStory on @hbomax is being postponed,” a tweet from the HBO Documentaries account reads announcing the change. “Instead, Larry has decided he wants to do it in front of an audience. Stay tuned for more info.”

The two-part documentary, directed by longtime “Curb Your Enthusiasm” collaborator Larry Charles was supposed to debut on March 1 at 9pm ET/PT and promised an unfiltered at the life of David. “This insightful two-part documentary finds the 74-year-old sitting down with friend/director Larry Charles for a peek behind the proverbial curtain, as David gets candid about his personal and professional highs and lows, from his humble beginnings as an unfunny Brooklyn kid to becoming America’s favorite misanthrope,” the official synopsis reads in part. “In between reflecting on his bumpy road to success – and hit series ‘Seinfeld’ and ‘Curb Your Enthusiasm’ – David shares his thoughts on everything from metaphysics to parenthood. Genuine, hilarious, and eye-opening, ‘The Larry David Story’ shines a new light on the infamous cynic who remains a singular voice in comedy today.” 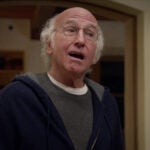 David just wrapped up the 11th season of his HBO comedy series “Curb Your Enthusiasm” and previously ventured into the feature film world with the 2013 HBO original film “Clear History.”

It’s unclear how soon David might take the bones of this documentary in front of an audience, if that theatrical performance might be filmed for consumption on HBO Max and whether the documentary may ever see the light of day.

Representatives for HBO Max did not immediately respond to TheWrap’s request for further comment on the matter.