HBO’s two-part documentary “The Larry David Story,” in which Larry David, the creator of “Curb Your Enthusiasm” and co-creator of “Seinfeld” looks back at his career, will debut March 1 at 9 p.m. ET/PT, the cabler said Wednesday. It will also be available to stream on HBO Max.

The two-time Emmy winner reveals he never considered himself funny in the first trailer for the documentary, stating “I’m a total fraud.” He also says he envies the fictionalized version of himself he plays on “Curb Your Enthusiasm”: “This ‘Curb’ guy is who I wanna be. He’s completely honest and I’m the complete opposite.”

Per the press release, “this insightful two-part documentary finds the 74-year-old sitting down with friend/director Larry Charles for a peek behind the proverbial curtain, as David gets candid about his personal and professional highs and lows, from his humble beginnings as an unfunny Brooklyn kid to becoming America’s favorite misanthrope.” 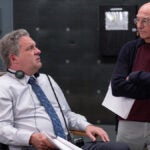 Charles, whose films include the mockumentaries “Borat” and “Brüno,” directs and executive produces alongside Mark Herzog.