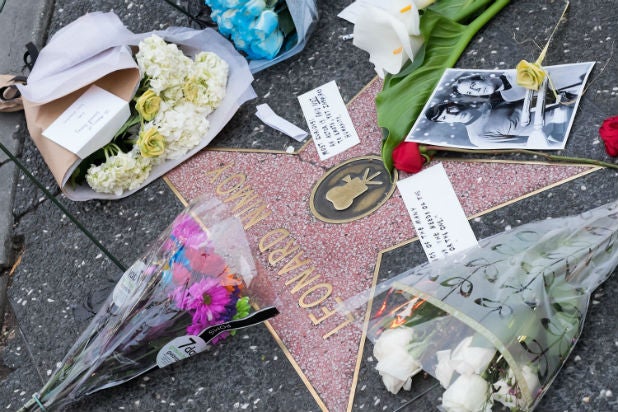 Over 300 people gathered at Leonard Nimoy‘s Los Angeles funeral on Sunday to say goodbye to the legendary “Star Trek” actor. Nimoy died at his home on Feb. 27 at age 83 after a bout with chronic obstructive pulmonary disease.

Among those at the service were Chris Pine, Zachary Quinto and J.J. Abrams, along with his wife of 26 years, Susan, and their children and grandchildren.

Just as generations of sci-fi fans were captivated by Nimoy’s performance as half-human, half-Vulcan Spock, attendees at the funeral listened intently to the dedication from Rabbi John L. Rosove, who is also Susan’s first cousin.

“At the moment Leonard’s soul left him on Friday morning, his family had gathered around him in a ring of love. Leonard smiled, and then he was gone. It was gentle passing, as easy as a ‘hair being lifted from a cup of milk,’ as the Talmud describes the moment of death,” he said.

“What did Leonard see? We can’t know, but Susan imagines that he beheld his beloved cocker spaniel Molly, an angelic presence in life and now in death.”

Nimoy’s family posted a message on his Facebook page offering their thanks for all the heartfelt tributes they have received. “Thank you for all the love and kind words to Leonard,” it read. “We lost a wonderful, talented, sweet man, a great father, husband, grandpa, and friend.

“Again thank you for all the love and good wishes. R.I.P and LLAP.”

As TheWrap previously reported, “Star Trek” co-star William Shatner initially tweeted his regrets over having to miss Nimoy’s funeral to be in Florida for a charity event. Although he was seen arriving at LAX on Sunday, he did not make it back in time to attend.

Read the full eulogy, which was posted on ReformJudaism.org.

Leonard shared with me after he and Susan married 26 years ago that he had never met a woman like her, never had he loved anyone so dearly and passionately, that she’d saved his life and lifted him from darkness and unhappiness in ways he never thought possible. His love, appreciation, respect, and gratitude for her transformed him and enabled him to begin his life anew.

Susan – you were a stellar, loving and brilliant life-partner for your Leib. He knew it and in loving you he learned how to love his own children and grandchildren more deeply, and he came to recognize that his family was his greatest treasure and gift.

At the moment Leonard’s soul left him on Friday morning, his family had gathered around him in a ring of love. Leonard smiled, and then he was gone. It was gentle passing, as easy as a “hair being lifted from a cup of milk,” as the Talmud describes the moment of death. What did Leonard see? We can’t know, but Susan imagines that he beheld his beloved cocker spaniel Molly, an angelic presence in life and now in death.

My wife Barbara and I shared much with Susan and Leonard over the years, in LA and in so many spectacular places around the world – so many joys and not a few challenges, and through it all we grew to love Leonard as a dear member ofour family and were honored that he felt towards us as members of his own family.

At his 80th birthday celebration three years ago, I publicly thanked him for all he’d meant to my family and me, for being the love of Susan’s life, and for bringing her so much happiness.

Kind-hearted, gentle, patient, refined, and keenly intelligent was he.

As I listened to NPR’s story of his passing on Friday, I was struck by how uniquely recognizable to the world was his voice, not only because of its innate resonance and gentle tone, but because it emanated who he was as a man and as a mensch.

He was unflappably honest and warm-hearted. He embodied integrity and decency. He was humble and a gentleman. His keen sensitivity and intuition connected him with the world and offered him keen insight into the human condition. Whatever he said and did was compelling, inspiring and provocative. He strove always for excellence.

Leonard’s Hebrew name was Yehudah Lev, meaning “a Jew with a heart.” His interests and concerns were founded upon his faith and belief in the inherent dignity of every human being, and he treated everyone regardless of station, friend or stranger, with kindness and respect. His world view was enriched by his Jewish spirit and experience.

Leonard was nurtured in the Yiddish-speaking culture of his childhood on the West End of Boston, yet he transcended the particular categories with which he was raised. He cared about the Jews of the former Soviet Union, about Jews everywhere, and he was concerned for all people as well.

Because he grew up as a minority in his neighborhood, even sensing at times that he was an outcast living on the margins (which is what his Spock character was all about), Leonard adventured out from the conservative home and culture of his youth, courageously at a very young age, into the world where he sought greater truth and understanding. He was curious about everything and was a life-long learner.

Leonard appreciated his success, never taking his fame and good fortune for granted. He was generous with family, friends and so many good causes often contributing without being asked, quietly and under the radar, to individuals and causes selflessly, without need of acknowledgment or credit. In his later years, he learned that by fixing his name to some gifts, he could inspire others to give as well.

Over the years, from the time he performed in the Yiddish theater as a young actor, Leonard was particularly drawn to Jewish roles in film, television, stage, and radio. Most enduringly he brought the gesture of the Biblical High Priest to the world’s attention as an iconic symbol of blessing. He was amused that his fans unsuspectingly blessed each other as they held up their hands and said, “Live long and prosper!”

Most recently, Leonard created magnificent mystical images of feminine Godliness in his Shekhina photographs, one of which he gave to me as a gift graces my synagogue study and adds a spiritual dimension for me of everything I do in my life as a rabbi.

One year Leonard asked me what I thought of his accepting an invitation from Germany to speak before thousands of Star Trek fans. He told me that he’d been asked before but always turned the invitation down due to his own discomfort about setting in a country that had murdered six million Jews. I told him that I thought it was time that he went, and that he take the opportunity to inform a new generation of Germans about who he was as a Jew and about the Jewish dimension of Spock’s personality and outlook. He liked the idea, and so on that basis accepted the invitation.

When he returned he told me that he had shared with the audience his own Jewish story and that Spock’s hand gesture was that of the Jewish High Priest blessing the Jewish community, an image he remembered from his early childhood attending shul with his grandfather in West Boston on Shabbes morning and peeking out from under his grandfather’s tallis at the Kohanim-priests as they raised their hands in blessing over the congregation.

He told me that when he finished his talk he received a sustained standing ovation, an experience that was among the most moving in his public life.

There’s another incident worth recalling.

The Soviet Film Institute had invited Leonard in the mid 1980s to come to Moscow to speak about Star Trek IV, which he had directed. Leonard agreed to come on the condition that he be granted free passage to Zaslov, Ukraine to visit Nimoy relatives he’d never met. The Soviet officials refused, so Leonard declined. Then they had a change of heart and caved, and he and Susan visited the Ukrainian Nimoys thus reuniting two branches of his family tree divided eighty years earlier. Who else but Leonard Nimoy could stare down the former Soviet Union and win!?

Over time, Leonard became one of the most positive Jewish role models in the world. He cared about all the right things, about promoting the Jewish arts, about peace and reconciliation between people and nations, and about greater justice in our own society.

He and I talked frequently about our love for Israel and its need for peace. He understood that a democratic Jewish state could survive only alongside a peaceful Palestinian state. He was disgusted by terrorism and war, disheartened by Israeli and Palestinian inability and recalcitrance to find compromise and a way forward towards a two-state solution and peace, and he was infuriated by continuing Israeli West Bank settlement construction and by both Islamic and Jewish fundamentalist extremism.

Though keenly aware of, knowledgeable about and savvy when it came to national and world politics and history, Leonard was at his core a humanitarian and an artist, and that was the lens through which he viewed the world.

Among his favorite quotations was that spoken by the 19th century actor Edwin Booth who claimed to have heard the solemn whisper of the god of all arts:

“I shall give you hunger and pain and sleepless nights, also beauty and satisfaction known to few, and glimpses of the heavenly life. None of these shall you have continually, and of their coming and going you shall not be foretold.”
Leonard did indeed glimpse the heavenly life in his artistic pursuits and in his love for his family and friends.

In thinking of him, I am reminded of Shakespeare’s words:
“Give me my Romeo; and, when he shall die,  Take him and cut him out in little stars, And he will make the face of heaven so fine That all the world will be in love with night And pay no worship to the garish sun.”

I’ve never known anyone like Leonard – he was utterly unique. I loved him and will cherish his memory always.

Zicharon tzaddik livracha – May the memory of this righteous man be a blessing.