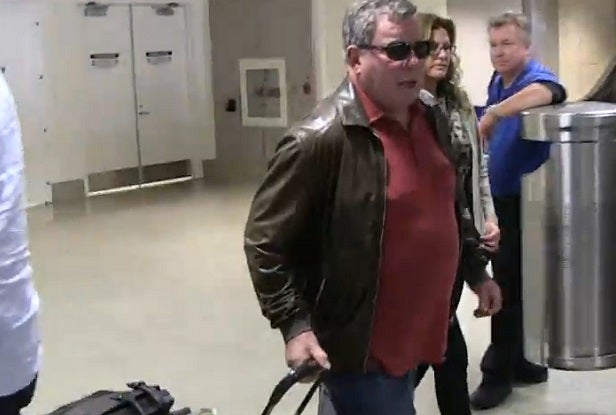 William Shatner has beamed himself back to Los Angeles where Leonard Nimoy‘s funeral was set to take place Sunday, according to media reports.

It was a shocker, because earlier in the day the former Captain Kirk on the hit “Star Trek” TV series spent hours on Twitter defending his decision to miss the service for his co-star, explaining that he couldn’t make it because of an earlier commitment to a Red Cross charity function in Palm Beach, Fla.

The 83-year-old Shatner even tweeted that his two daughters would attend in his place. But on Sunday afternoon, TMZ posted video of Shatner arriving at LAX. The footage showed him lugging a suitcase through the baggage claim area as the photographer asked if he had changed his mind about attending Nimoy’s funeral. But the actor did not respond.

The photographer then asked Shatner if his charity event in Florida went well, and he replied, “Yes.”

Nimoy died Friday at 83. He was best known for his portrayal of “Star Trek’s” logic-driven, half-human science officer Spock, an ally and foil to Shatner’s Kirk.

The situation surrounding Nimoy’s funeral was amplified when the New York Daily News called Shatner “Captain Jerk” on its Sunday front page for not attending the funeral. Shatner then tweeted an image of the paper’s cover to his two million followers and invited them to “discuss it.”

“I chose to honor a commitment I made months ago to appear at a charitable fundraiser. A lot of money was raised. So here I am; tell me off.”

That drew tons of Twitter responses, some understanding of Shatner’s stance, while many others ripped it. Shatner went on a tweeting rant, taking critics, a radio host, journalists and the Daily News to task before finally thanking all for “celebrating the life” of .”

Watch the video of Shatner returning to LAX.