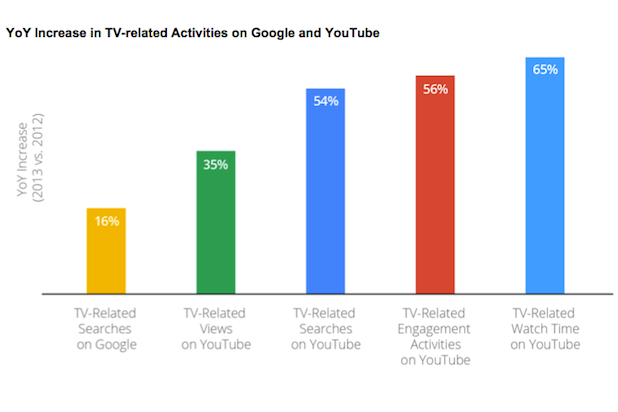 Like Facebook, Twitter and many other technology companies, Google wants more of Hollywood’s money. It believes TV networks should view YouTube as a cornerstone of their marketing campaigns, an indispensable tool for speaking to younger viewers.

And it’s citing a new study tracking viewer interest over the course of the year based on Google search and YouTube views. This new Google white paper demonstrates the popularity of TV-related content on the world’s largest search engine, as well as that search engine’s popular video site.

Some of the findings?

What should TV networks make of this?

Spend more on YouTube. Google won’t say that, insisting this report is “not instructional.” But that’s the general message.

“My team oversees the broadcast advertising business; we partner with NBC, Fox, CBS, and this is about helping them form their marketing strategies,” Angie Barrick, Google’s head of media, industry and entertainment, told TheWrap.

“We looked to see if we could indicate online behavior might be an indicator of a show’s popularity.”

And what did they find? Of course it is.

Most of the findings reinforce suspicions the TV industry already had.  For example, Sunday is the most important day for reaching potential viewers.

This latest report also reinforces the television industry’s current behavior, suggesting that the millions of dollars television networks lavish on presentations to advertisers, Comic-Con and television critics is money well spent.  Audience queries regarding TV shows peak around those big events, and the media coverage that accompanies those events sustains heightened interest for months to come.

“The investment in Comic-Con is driving activity around Google search and YouTube search,” Barrick said. “It’s not dropping off after the event happens, it elevates brand awareness higher than it would have been before Comic-Con.

“They feel Comic-Con is great, but it’s good to see the volume of searches spike and stay higher.”

Comic-Con is but one example, of course, and staging big events can only take you so far. Just look at Jimmy Fallon and Jimmy Kimmel. Their shows have succeeded in part because of their willingness to cultivate an audience on YouTube by posting clips. While 10 million people watched Fallon’s debut, 20 million watched him on YouTube.

Posting short clips may not work as well for serialized drama, but you can bet Google will find a strategy that does.

The study is about “understanding research behaviors of audiences,” Barrick said, and “audiences have grown by double digits across the board on Google and YouTube.”