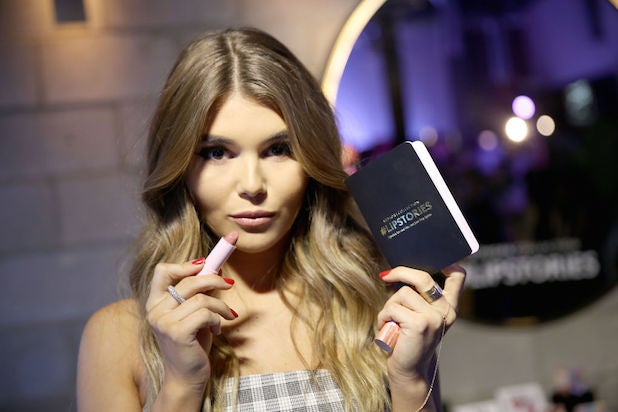 Olivia Jade Giannulli, the daughter of actress Lori Loughlin, has returned to making YouTube vlogs months after her mom was accused of participating in the ongoing college admissions scandal.

Giannulli, who goes by Olivia Jade on YouTube, posted her first video in eight months on Sunday afternoon. In the brief clip,  Giannulli talked to the camera in a candlelit bedroom, but didn’t offer details on the case against Loughlin or her father, designer Mossimo Giannulli; both have been accused of paying off University of Southern California employees to get her into the school.

Giannulli said she “genuinely” missed making YouTube videos but debated whether it was worth returning since she is unable to talk about the pending charges against her parents.

“There’s no point in me just talking for 10 minutes to the camera about how I wish I could say something when I really can’t,” she said.

The video has racked up more than 1.3 million views as of early Monday morning.

She added she was “terrified” to start making videos again, but would have more content coming to her 1.9 million subscribers in the near future. Prior to the college admissions scandal, Giannulli had than 170 million views on her mostly beauty-related videos. Two days after the initial charges were brought against her parents in March, Sephora dropped its partnership with Giannulli.

Last month, Loughlin and Giannulli pled not guilty to bribery charges brought against them in the college admissions scandal.

The charges are part of a three-count indictment against the parents, who previously pleaded not guilty to charges of fraud and money laundering. Loughlin and Giannulli were among 11 parents hit with new charges by a federal grand jury in an indictment returned on Oct. 22 that said the parents “conspired to commit federal program bribery by bribing employees of the University of Southern California (USC) to facilitate their children’s admission,” according to the Department of Justice.

“In exchange for the bribes, employees of the university allegedly designated the defendants’ children as athletic recruits – with little or no regard for their athletic abilities – or as members of other favored admissions categories.”

The charge of conspiracy to commit federal programs bribery carries a maximum sentence of five years in prison, three years of supervised release, in addition to a fine of $250,000 or twice the gross gain or loss, whichever is greater.

Loughlin and Giannulli have consistently denied any wrongdoing and maintain their innocence.