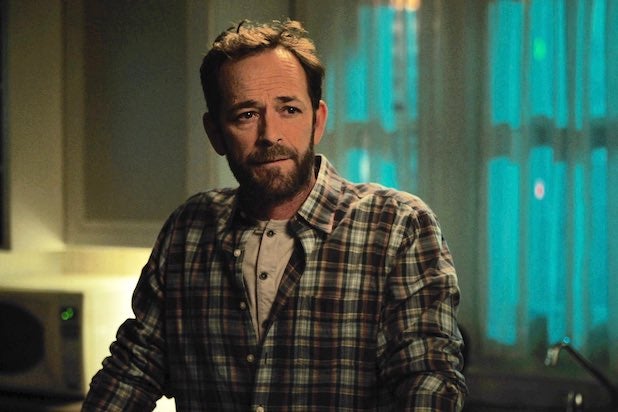 “Riverdale” fans said goodbye to Luke Perry Wednesday night, as The CW aired the last episode of the dark Archie Comics-inspired drama the actor filmed before his death. But it remains to be seen how his character, Archie’s father Fred Andrews, will be written off the series.

Perry’s final scene was a meaningful conversation between Fred and Archie (K.J. Apa) about Randy Ronson — the man who died after Archie knocked him out of the ring on last week’s episode. When the two returned home after learning the news, Archie told Fred in their kitchen he blamed himself for Randy’s death, even though the now-dead fighter had taken drugs right before their fight. But Fred comforted his son, telling him the drugs were what led to Ronson’s death. His final words to Archie on screen were, “You’re innocent.”

On Sunday, “Riverdale” showrunner Roberto Aguirre-Sacasa revealed tonight’s episode was the final one with Perry. “This week’s #Riverdale is the last episode Luke filmed. As always, Fred’s imparting words of wisdom to Archie,” Aguirre-Sacasa tweeted. “A beautiful, true moment between a father and his son. Wish these scenes could go on forever…”

Perry died March 4 at the age of 52 following a massive stroke. Later that week, the first episode of the CW drama to air since his death paid tribute to the actor, with a title card that read: “In Memoriam: Luke Perry, 1966-2019.” Aguirre-Sacasa told fans on Twitter that episode was dedicated to Perry, “as all episodes will be for the rest of our run.”

“Riverdale” has already been renewed for Season 4 and there are several more episodes left to air this season, so now the question becomes, how will the show write off Fred?

“Riverdale” airs Wednesdays at 9/8c on The CW.

This week’s #Riverdale is the last episode Luke filmed. As always, Fred’s imparting words of wisdom to Archie. A beautiful, true moment between a father and his son. Wish these scenes could go on forever…❤️????????????????‍???? pic.twitter.com/meokbvo0Wt