Maron paid a visit to Tom Segura’s “2 Bears, 1 Cave” podcast on Monday, where he assured Segura, who recently set-up shop in Austin himself, that, “you’re different. You’re your own guy, you’re your own life, you weren’t one of the guys who rented out space in Joe’s ass.”

Rogan’s lucrative deal for his popular “Joe Rogan Experience” coincided with his move to The Lone Star State last year, citing “freedom” and wanting to be in the center of the country. Other wealthy, allegedly free-thinking dudes have followed suit.

“People are going to see that and say, ‘Look at Maron, he’s bitter.’ Why wouldn’t I be?” he asked rhetorically, adding, “One hundred million dollars for going ‘I don’t know.’ Really? … ‘I don’t know, man.’”

Rogan signed his exclusive contract with Spotify last May, transitioning “The Joe Rogan Experience” exclusively to the streamer by the end of the year, with the exception of the videos of the podcast, which are still posted to his YouTube channel. Rogan was already the top-earning podcaster before the move to Austin, raking in $30 million dollars in 2019, according to Forbes. 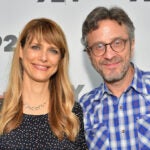 Also Read:
Marc Maron Opens Up About the ‘Devastating’ Loss of Lynn Shelton: ‘I Cry Every Day’

Maron’s not doing too shabby himself though. Since its launch back in 2009 (the same year as the inaugural “Joe Rogan Experience” episode), WTF’s over 1,000 episodes have featured distinguished guests from former President Barack Obama to Sir Paul McCartney. Slate magazine named Maron’s 2010 interview with Louis CK as the No. 1 podcast episode of all time and, recently, it was announced that Maron and his producer Brendan McDonald would be the recipients of the first-ever Governors Award by the Podcast Academy for Excellence in Audio (The Ambies) for their work.