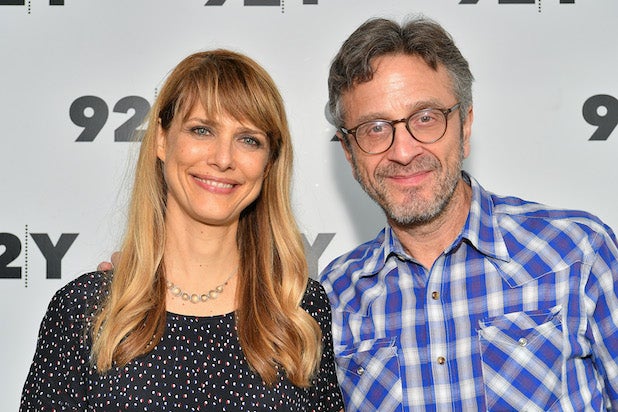 Lynn Shelton’s posthumous Emmy nomination brought up bittersweet memories from her longtime partner, comedian Marc Maron, who opened up in a The New York Times interview this weekend about their personal and creative relationship, and her sudden death from acute leukemia at the age of 54.

Maron was candid about the day of Shelton’s death three months ago and his struggle with coming to terms with it since. Back in May, Shelton had developed a high fever and swollen throat glands, and he was concerned that she had contracted COVID-19. She made an appointment to see a doctor but collapsed at home before she made it there. The cause of death was organ failure connected to acute myeloid leukemia.

“I went [to the hospital] that night and spent a few minutes with her body. It was the heaviest thing I’ve ever done,” Maron said. “It was just devastating. I was blown out, totally traumatized. Totally heartbroken.”

With the COVID-19 pandemic still ongoing, Maron has had little else to do beside grieve.

“I cry every day,” he shared. “The shock and the trauma have dissipated a little bit, so now I deal with the loss. I have her jacket that she always wore, and her hat and boots. I have the shirt that I met her in. I touch these things when I can and try to keep her with me.”

Shelton’s memorial events were eye-opening for Maron, who came to realize that he didn’t know her as well as many others did. They had first connected when she appeared as a guest on his podcast, but there were those at the memorial who had known her for 25 years. “Hearing everybody’s experiences with her, working on all these films, I’m like, what stories do I have?” he wondered. “But I realized we had a unique frequency to our connection.”

Shelton was nominated as a director for the Hulu limited series “Little Fires Everywhere” starring Kerry Washington and Reese Witherspoon and had directed several episodes of Maron’s hit Netflix series “GLOW” before the two began dating for about a year. Her TV directing career also included episodes of “The Good Place,” “Mad Men,” “Fresh Off the Boat” and “The Mindy Project.”

She also wrote and directed eight feature films, including “Sword of Trust,” which Maron starred in last year.

“I know for a FACT Lynn Shelton would be thrilled with her Emmy nomination for directing,” Maron tweeted this past week. “Deserved. She was the real deal. Miss her. A lot. Love her.”