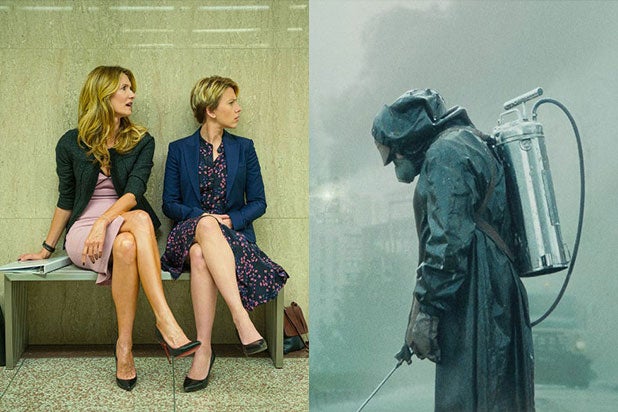 Noah Baumbach’s “Marriage Story” led the Golden Globes’ film nominations on Monday with six nods, while “Unbelievable,” “Chernobyl” and “The Crown” received the most nominations in the TV categories with four each.

“The Irishman” and “Once Upon a Time… in Hollywood” got five nominations each, while “The Two Popes,” “Joker” and “1917” each received four. In the TV categories, “Fosse/Verdon,” “The Kominsky Method,” “Big Little Lies,” “Succession,” “Barry,” “Fleabag” and “The Morning Show” each received three.

“Game of Thrones” and “Russian Doll” only received one nomination each, and that’s for lead actors Kit Harington and Natasha Lyonne, respectively. “The Handmaid’s Tale” was left out on Monday morning, as was Sandra Oh for “Killing Eve,” who won Best Actress in a Drama TV Series last year for her role. Beyonce and Taylor Swift will battle it out in the Best Song category, for their respective songs in “The Lion King” and “Cats.”

All in all, Netflix dominated with 34 nominations across the TV and film categories. The other streaming giants — Netflix, Hulu and Amazon Prime — also came out strong on Monday.

The 77th Golden Globe Awards will take place on January 5th and will be broadcast on NBC. Produced by Dick Clark Productions and the HFPA, the ceremony will be hosted by Ricky Gervais, for the fifth time.

You can see the full list of nominations here.