Among the show-business pioneers whose acts entertained millions all over the world, Marty Krofft and his brother Sid have stood behind the scenes, holding the strings. Literally. The Kroffts’ puppets and animated characters have performed, among other venues, in Paris and Las Vegas nightclubs, amusement parks, world fairs, on television and, with this weekend’s opening of “Land of the Lost,” now film. Marty Krofft talked with Eric Estrin about his fear of Judy Garland, the beginning of deficit financing in entertainment, and why Dean Martin preferred real boobs.

My brother Sid is older than me. We had separate puppet acts until we came together and I worked for him in his act. Then we became partners, and he says I took over. 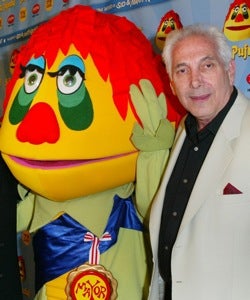 I was living in New York, I was 18, and I was selling cars, and I always wanted to come to California. So he needed somebody to help him. The guy he had working with him for years quit, so I took the opportunity, and I went out. That’s how it started.

The first job we did together was for Liberace. We were in Wildwood, New Jersey, at the time at a hotel. We were with Judy Garland at the Fontainebleau, also. That was the beginning. We were with Liberace a couple years, Judy for a year, with Tony Martin and Cyd Charisse for a couple of years.

It was frightening to be with Judy Garland. It was Judy Garland … but she was phenomenal.

My brother was at the Lido in Paris with the act, and then one morning he wakes me up and he says, “Look, let’s do a big show, an adults-only puppet show, and we’ll do it just like the Lido. We’ll have swimming pools, an ice skating rink; we’ll have the puppets over the audience being tracked, just like the Lido.”

So the next thing you know, we created that show and we put it in a Vegas-type joint in the Valley, the Gilded Rafters. The guy who bought it, his name was Nat Hart, and he was the maitre d’ at the Flamingo Hotel when we were there with Judy. He had left Vegas and bought this little club. He always wanted the puppets to have a show.

So we opened our adults-only puppet show, which we called Les Poupees de Paris, and that turned the puppet act into a business.

This was a big show that was creatively an instant hit, but it was hard to turn a profit because of our overhead. So we went from there to the World’s Fair in Seattle. They built us a theater for a bigger edition of the show. Then we got a club in Hollywood called PJ’s, which was the first disco in the country, and we had our own room in the back.

Then we wound up at the New York World’s Fair and we met Angus Wynne, who owned the Six Flags parks. He wanted to know if we’d do a family puppet show; he’d build us a 1,000-seat theater. So we wound up in Atlanta with Six Flags; then we wound up in St Louis, Dallas and Atlanta; and then he wanted to start a company that could build us rides and stuff like that. So we built a thing called the Entertainment Factory. We were like the poor man’s Walt Disney.

While we were at the New York World’s Fair, Dean Martin came to see us, and he was gonna go on the air the following year, so he had us build showgirls for him that were gonna be in his show. We did 10 shows with him, but he never wanted to rehearse properly. We would rehearse all week with Dean Martin standing on the left. When he got there on Sunday, he didn’t want to stand on the left, he wanted to stand on the right. And with puppets, you know, people think it’s easy but it’s not.

So he hated the puppets. He fired us and replaced us with the Gold Diggers. He went from wooden boobs to real boobs.

But we had our factory and we were doing business with big companies like GM, DeLorean, Ringling Bros, and then Hanna-Barbera came to us. They were doing a show called “The Banana Splits,” so we wound up doing “The Banana Splits” for them. So then NBC said, Hey, why don’t you create your own TV series.

Pufnstuf was a character in a show for the Coca Cola Company at one of the other World’s Fairs in San Antonio, called HemisFair. We had a character in that show called Luther that was really Pufnstuf, so that evolved out of that show, and that was our first series.

We only had 17 episodes with “H.R. Pufnstuf,” because the network never wanted to pay us enough to do it. They gave us $54,000 an episode, and it cost us about $90,000. So we took all the money from the puppet shows and put it toward the deficit.

Because we did that, we’re still independent, and we’re always funding our over-budget, robbing Peter to pay Paul, but we own everything.

It was the smartest thing that we did. I guess we knew something.