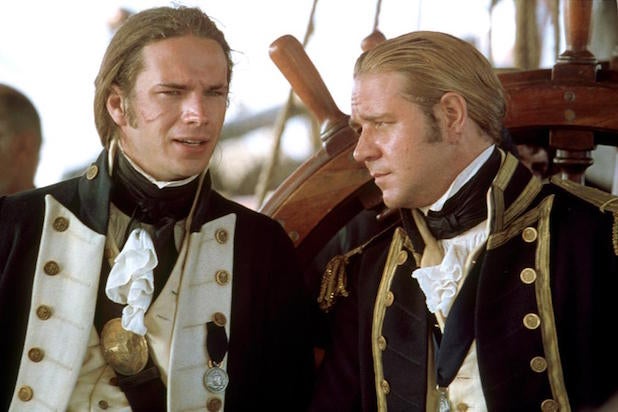 Though it wasn’t the blockbuster success Fox hoped for, “Master and Commander: The Far Side of the World” — which celebrates its 15th anniversary on Wednesday — is still fondly remembered by those who worked on it, including James D’Arcy, who spoke with TheWrap about his first experience making a big-budget Hollywood film.

D’Arcy recalled he wished Russell Crowe hadn’t risked killing himself for the sake of his craft.

Also Read: 'Master and Commander': 15th Anniversary of the Franchise That Never Was

The “Broadchurch” star discussed how the crew spent 10 days at sea filming aboard a faithful replica of a 19th century naval ship (a ship that is still docked in San Diego and open to visitors, by the way). For one scene, D’Arcy and Crowe had to climb up to the crow’s nest for a helicopter shot and were given safety harnesses for climbing up the rigging.

D’Arcy, having never worked on a sprawling studio film before, gladly took the harness. But Crowe, the “Gladiator” veteran, decided to film his scene, climbing up, without the safety gear so it didn’t have to be edited out of the footage. Crowe then put the harness up in the crow’s nest before climbing back down, D’Arcy recalled.

“But when we got to the top he asked, ‘James, can you see my harness?'” said D’Arcy. “I told him I could sort of see the belt, and he just said… ‘Take it off.’ And I told him that they could just remove it from the shot with computers, and he just gave me that Russell Crowe look and said ‘Take. It. Off.'”

“And as I’m taking it off I’m wondering, if Russell falls… does that make me an accomplice?”

For more from D’Arcy and producer Duncan Henderson about “Master and Commander” on its 15th anniversary click here.