For all its glorious trappings (filming at the most expensive mega mansion in the U.S. known colloquially as “the One”, for starters), Apple TV+’s new comedy “Loot,” which follows a billionaire looking to reinvent herself for the better, is all about the “heart underneath,” said its Emmy-winning star and executive producer Maya Rudolph.

This much is evident in the cast’s praise of Rudolph and each other, and extends to the series’ unlikely assembly of characters, all of whom try to bring out the best in each other. The ensemble features Golden Globe-winner Michaela Jaé Rodriguez (“Pose”) as the stern yet passionate nonprofit organizer Sofia. She initially keeps Rudolph’s Molly Novak at arms length. As an audience stand-in, her Sofia delivers lines that dismiss Molly’s actions as “sick, rich-person s—.”

“I loved the complete, sheer differences between these two women and I definitely wanted to dive into it,” Rodriguez said, adding that she hoped (and knew) she and Rudolph would get along: “That’s the part that made me so happy, and also just being next to Maya Rudolph — she’s a superstar.” (“Sorry, what’d you say?” Rudolph responded, feigning flattery. “C’mon now.”)

The “Saturday Night Live” alumna echoed her co-star’s sentiments, juxtaposing Molly’s “pure ignorance to how life really works” to Rodriguez’s no-nonsense character. “I really love that they are such an odd couple, and I feel like you already know inherently that there’s going to be so much to play [with]…. But knowing that we were going to be focusing on the heart underneath all of it is what I love about it.”

“Loot” opens with Molly’s picture-perfect lifestyle on the eve of her 45th birthday. She has a mega yacht and a glamorous birthday bash that’s attended by none other than Seal (in a delightfully unexpected cameo role). But her marriage is crumbling. During the party, she discovers her husband — a tech startup mogul played by “Severance” star Adam Scott — is cheating. Amid a tabloid-fueled crisis, she learns that, along with her billions, she actually has a charity foundation. Seeking to escape her old life of opulence and to ground herself in something real, she decides to get involved and give back. Helping her on the way are Sofia, her ever-loyal assistant Nicholas (“Fire Island” writer and star Joel Kim Booster), her sensitive and pop culture–obsessed cousin Howard (Ron Funches) and her lovably awkward accountant Arthur (Nat Faxon).

What brought the cast together is a shared love for comedy (Booster, Funches and Faxon all come from backgrounds doing stand-up) and Rudolph, whose character is the rough diamond at the show’s center.

“I just enjoyed us being at the foundation, just hanging out together — I think that’s where we bonded a lot,” Funches said of his favorite location on set. “It became a lot like summer camp, which is usually [how] the best acting gigs end up being — just a big summer camp experience where you all fall in love with each other.”

While the entire ensemble slowly but surely coaches Molly to regular personhood (with varying degrees of success), Faxon’s Arthur — a mild-mannered recent divorcee — is especially instrumental to her growth.

“Since they’re both at these transitional moments in their lives, they’re needing things from each other,” Faxon said, characterizing the two characters as having a “yin and yang relationship.” “I do think that my character is giving Molly a little perspective and a little reminder to take a breath like: ‘Enjoy the simple things; things don’t have to be so loud and noisy all the time. They can be quiet and intimate and real, and that’s OK.’ Conversely, Molly gives to Arthur a little bit of confidence and energy and willingness to step out of his comfort zone and not be so timid and sheltered.”

Having worked with creators Alan Yang and Matt Hubbard before on Amazon Prime Video’s “Forever,” Rudolph had “faith” that her character, though a billionaire, wouldn’t be a total “POS.”

“When you’re given this position with this amount of money, do you choose it for good? And what [do] those possibilities look like and what [do] those choices look like? I thought that was really exciting because of the time that we’re living in. There is good, but there is so much wrong, and there’s so much to fix,” Rudolph said. “That was an exciting opportunity to examine.”

Watch a portion of the interview with the “Loot” cast above. 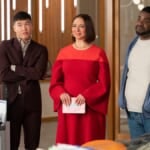