Notes on the honorary Oscar recipients, part one…

She’s a legendary star whose first trips to the Academy Awards usually came on the arm of the even-more-legendary Humphrey Bogart, an actress whose own take on her career was blunt and unsentimental.

“I’ve had a lousy career in many ways,” Lauren Bacall once said. “Very sparse, very up and down, in and out.” 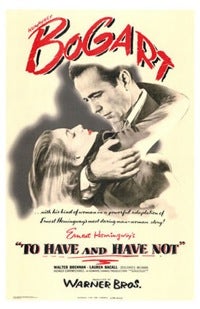 She had a star-making film debut in 1944 with “To Have and Have Not,” acted a few more celebrated films (including “The Big Sleep” and “Key Largo”), but was never nominated for an Oscar; when she showed up at the awards in 1975, the Oscar announcer dubbed her “one of the greatest actresses never to win,” failing to mention that she’d also never even been nominated.

When she was finally nominated, for 1996’s “The Mirror Has Two Faces,” she was considered a prohibitive favorite – but, some suggested, the lack of affection for that Barbra Streisand-directed film led to a shocking upset at the hands of Juliette Binoche and “The English Patient.” Days later, Bacall felt compelled to tell the press that contrary to widespread reports, she was NOT devastated by the loss.

She’s appeared on the Oscar stage several times over the years, including a spot in 2006 introducing a montage of film-noir clips. On that show, she appeared to be confused as she stumbled over her lines, leading to plenty of post-show comments wondering just what was wrong with her.

Having been at her rehearsals that year, I’d say that the main problem was that she was sabotaged by technology and a curious intransigence on the part of the show’s writers.

To begin with, the introduction that had been written for Bacall was fairly involved. Because of vision problems, she’d asked for the print on the TelePrompTer to be as large as possible. But when you combine large print with long sentences, the result is a performer’s nightmare: with only a couple of words per line and a few lines per screen, you can never see the end of the sentence you’re reading.

It’s a recipe for confusion, and at rehearsal Bacall knew it and asked that her lines be rewritten into shorter sentences. For some reason, the changes were never made (even though rehearsal rewrites are common at the Oscars). So, predictably, she stumbled over those lines during the show.

Backstage, though, she cheered up when the winners of best documentary, the team responsible for “March of the Penguins,” came offstage bearing stuffed penguins. She beamed when she saw the stuffed animals – whereupon one of the delighted winners insisted that she take his penguin.

“I love it,” Bacall said, squeezing the penguin and temporarily, at least, forgetting the troubles she’d had onstage.