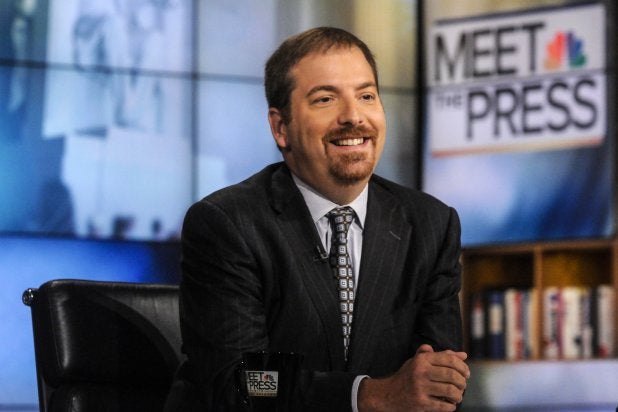 Chuck Todd’s debut as the new moderator of “Meet the Press” gave the NBC show a big ratings boost Sunday. “Meet the Press” scored the top honors for a public affairs program on Sunday in both total viewers and the key 25-54 news demo, according to preliminary numbers.

With Todd’s Sunday premiere, “Meet the Press” drew 2.977 million total viewers, the show’s biggest audience since March. That number represents a 10 percent bump from a year ago for the NBC show, and a 19 percent boost over the previous four weeks.

In addition to being the best demo performance for “Meet the Press” since June 29, Sunday’s demo performance was up 16 percent from a year ago and 13 percent compared to the prior four weeks.

“We couldn’t be more proud of Chuck’s first show and are so appreciative of the viewers that turned to ‘Meet the Press’ this Sunday,” an NBC spokesperson said of the ratings performance. “At the same time, we know that one week does not equal a trend and expanding our regular audience will take a slow build week to week.”