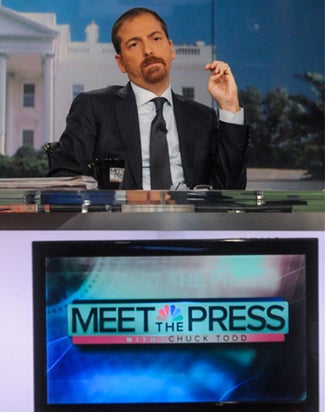 The passing of the baton is officially complete.

Chuck Todd moderated his first episode of NBC’s “Meet the Press” on Sunday by telling viewers, “We’re making a few changes around here.”

He opened the political talk show by paying tribute to some of his predecessors on the program including David Gregory, who was ousted by NBC last month.

“As I’d like to say, we’re living in a house as we remodel it, so the program and studio will continue to evolve over the coming months,” Todd said before tossing to his weekend interview of President Barack Obama in which he grilled the President on the terrorist group ISIS, and his decision to delay action on immigration reform until after the November midterm elections.

“You made a decision to delay any executive action until after the election,” Todd said to Mr. Obama. “What do you tell the person that’s going to get deported before the election that this decision was essentially made in your hopes of saving a democratic Senate?”

“A couple of things that I want to say about immigration,” the President said. “Number one, I have been consistent about why this is important. The country’s going to be better off if we have an immigration system that works.”

The President then tried to expain why he was putting off making a decision on the hot-button issue. “Not only do I want to make sure that the Ts are crossed and the Is are dotted, but here’s the thing, and Chuck, and I’m being honest now, about the politics of it. This problem with unaccompanied children that we saw a couple weeks ago, where you had, from Central America, a surge of kids who were showing up at the border, got a lot of attention. And a lot of Americans started thinking, “We’ve got this immigration crisis on our hands.” He continued, “Now, the fact of the matter is– is that the number of people apprehended crossing our borders has plummeted over the course of the decade. It’s far lower than it was 10 years ago.”

He also brought on the mayors of Oklahoma City, Pittsburgh and Tacoma, Wash., to discuss gridlock in Washington and how mayors are doing a better job.

“It’s not politics that people hate,” Todd said. “It’s the politicians who don’t know how to do it.”

Scarborough, host of MSNBC’s “Morning Joe,” will serve as a regular contributor to “Meet the Press,” the network announced on Friday. Luke Russert, son of longtime moderator Tim Russert, is also joinging the show as a reporter.

NBC decided to revamp the Sunday news show after it slid to third place in the ratings behind CBS’ “Face The Nation” and ABC’s “This Week.”