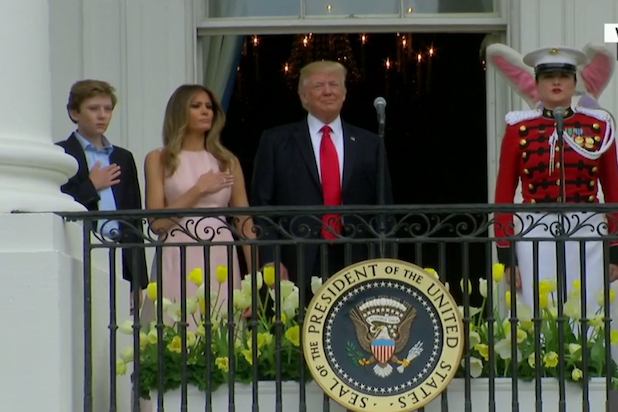 First Lady Melania Trump appeared to give her husband, President Trump, a subtle nudge to remind him to place a hand over his heart for the National Anthem during Monday’s annual White House Easter Egg Roll.

That's a subtle nudge from Melania to remind Trump to lift his hand during the national anthem… https://t.co/P9XlYpjvcQ

It didn’t take long for Twitter to react and poke fun at everyone involved in the situation. One user said, “Melania looks miserable,” while another chimed in, “I’d laugh if I wasn’t crying – this is the actual president.”

Also Read: 'Morning Joe' Warns Steve Bannon: 'When You Take on the Family, You Lose' (Video)

One user tweeted, “If you see a longer version of the video. You realize that Trump had to check where his heart was.” Many pointed to the fact that the First Lady is an immigrant.

“Quite telling that the first lady, an immigrant, had to remind him,” Huffington Post writer Andy McDonald wrote.

President Rutherford B. Hayes started the Egg Roll tradition back in 1878, with the bunny first making an appearance in 1969 during President Richard Nixon’s administration, according to the New York Daily News. Other than the National Anthem moment, the 2017 version of the Egg Roll appeared to go off without a hitch. Unfortunately for Trump, it doesn’t take much to get mocked across social media these days.

Check out some of the online reaction:

What kind of Commander-in-Chief can't be bothered to put his hand over his heart for our National Anthem? #Unpresidented! pic.twitter.com/heoNUCwZhj

"I want to start three wars."

"Sir, perhaps you should master the National Anthem, and then we'll move on to bigger things."

An immigrant had to remind @realDonaldTrump to put his hand over his heart for the national anthem. #EasterEggRoll pic.twitter.com/Qpdsbgzx8p

@JordanUhl Look at his face…he couldn't hear the National Anthem over the song in his head – "Donny Trumpy is the best, doo da, doo da…" Sickening.

Just another immigrant doing a job Americans wont do. https://t.co/j3FNaxCtO2

A good way to get Trump to put his hand over his heart during the National Anthem is to put a little pussy pin on his lapel pic.twitter.com/5jp98MINjd

Oh an Immigrant had to show the POTUS how to pleade alligence to our flag unbelievable i wonder if he can sing the national Anthem? https://t.co/2hN844OQUh

Just saw a video where Melania Trump had to nudge Donald Trump's hand so he could put it over his heart while the national anthem was on. ????

Trump's too busy preening and puffing his chest out to notice something trivial like the National Anthem. ???? https://t.co/SE2BjqbmWp

I was taught that during #NationalAnthem that you are supposed to put hand over heart. Am I wrong?