Right-wing conspiracy theorist Mike Cernovich scored one of his biggest victories when he helped get James Gunn fired from Marvel’s “Guardians of the Galaxy“ franchise by highlighting old tweets in which Gunn joked about rape and pedophilia. But as many of Gunn’s defenders have noted, Cernovich has his own history of tweets about rape.

Many of the tweets predate Cernovich gaining online fame as a Trump superfan and purveyor of the discredited Pizzagate theory of 2016, which falsely claimed that a Washington, D.C. pizzeria fronted a child-sex ring.

Many of Cernovich’s tweets have been deleted, but are still available through internet archive sites. Cernovich, who declined to comment for this story, says he flags old tweets by Gunn and other liberals to argue that they should be held to the same standards as conservatives who make potentially offensive remarks.

Cernovich first gained attention in men’s-rights and pickup-artist circles online. In 2012, he wrote that “date rape does not exist,” tweeting: “Have you guys ever tried ‘raping’ a girl without using force? Try it. It’s basically impossible.”

He tweeted in 2013: “Do a Google image search for ‘lions mating.’ That’s basically rape and it’s also the natural form of sex.”

A 2016 New Yorker profile noted that Cernovich was himself accused of rape years ago, but that the charge was reduced.

“In 2003, he was accused of raping a woman he knew; the charge was later dropped, but a judge ordered him to do community service for misdemeanor battery. (His record has since been expunged),” the New Yorker reported.

In a 2014 interview, Cernovich said the rape accusation changed his life.

“I f—ed a girl, she said I raped her, that cost me 50 grand, it cost me five years of my life, I got depressed, I gained like 80 pounds … yeah, but now look at me now,” he said. “What if I’d not f—ed her? Maybe I’d be some f—in’ schlub, dude, living a life of quiet desperation with three kids and a wife that hates me. And now I’m f—in’ lovin’ life, dude. So I’ve never made a mistake.”

His tweets demonstrate an intense interest in false rape accusations.

“If you can’t accept the risk of a kid, STD, or false rape case, then don’t play the game,” Cernovich tweeted early in 2012.

A couple of weeks later, he tweeted: “A whore will let her friend ruin your life with a false rape case. So why should I care when women are raped?”

A few months after that, Cernovich proclaimed: “Rape via an alpha male is different from other forms of rape. We can’t really understand this, as our culture is too detached from instinct.”

He also once wrote: “Online dating gives you the chance to test the hypothesis that ugly/fat/marginalized women have great personalities. They don’t.”

“Next time, don’t settle for the make out,” he wrote in February 2012.  “If possible, at least pull out your dick. If you can get her to touch it, even better. If not, just let her know that your cock is too swollen to go back into your jeans, and that, ‘Either you’re taking care of this, or I am.'”

In a December 2011 post, “How to Choke a Woman,” Cernovich wrote that choking a woman during sex as “a useful indicator of your strength as a man.”

“Women enjoy being choked during sex,” he argued. “It turns them on and gives them more powerful orgasms.”

“The Harvey Weinstein case showed us that Hollywood is rotten to the core. We are continuing our investigation into the conduct and behavior of members of the Hollywood elite,” he said.

“I enjoy just the raw human visceral reaction of jumping into the arena and just swinging the hammer and seeing what is left over afterwards,” he said. “Twitter is just modern-day gladiatorial combat.”

Here are some of Cernovich’s old tweets. 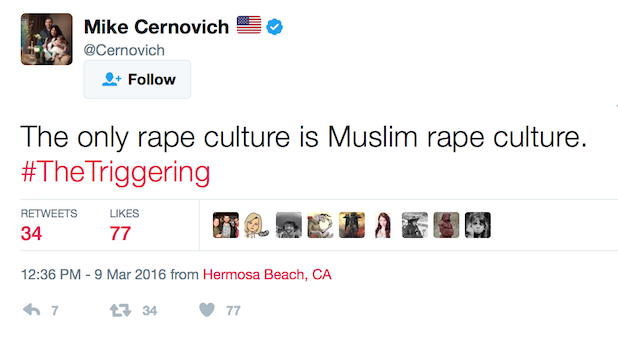 If you can't accept the risk of a kid, STD, or false rape case, then don't play the game.