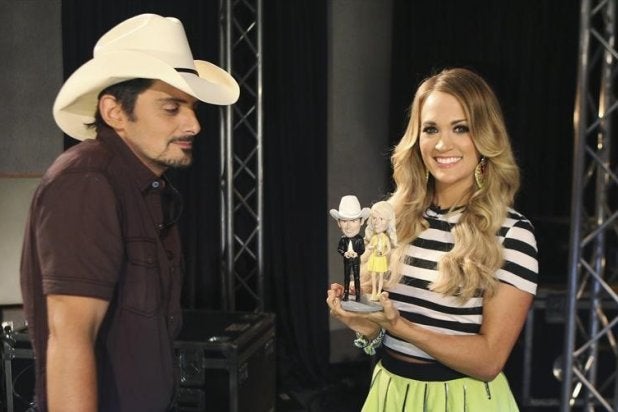 It was a huge night for Miranda Lambert at the 2014 Country Music Association Awards on ABC, but in some ways an even bigger one for Luke Bryan. The event was presided over by perennial hosts and fan-favorites Brad Paisley and Carrie Underwood. It was their seventh time hosting.

Lambert took home four awards out of the nine categories she was nominated in, including album of the year, single of the year and female vocalist of the year. But she didn’t take home the night’s top prize. That one went to Luke Bryan, and it was his first-ever CMA trophy.

The night’s entertainment featured plenty of unlikely duets, including Lambert pairing with Meghan Trainor for the latter’s hit “All About That Bass.” Other performances paired Blake Shelton with Ashley Monroe, while Little Big Town sang with Ariana Grande and the Doobie Brothers hit the stage with Hillary Scott, Jennifer Nettles and Hunter Hayes.

The full list of winners at the 2014 CMA Awards is below.

Single of the Year
“Automatic,” Miranda Lambert – WINNER
“Drunk On A Plane,” Dierks Bentley
“Give Me Back My Hometown,”  Eric Church
“Meanwhile Back At Mama’s,” Tim McGraw feat. Faith Hill
“Mine Would Be You,” Blake Shelton