Mixer rocketed to the top after Ninja, a 28-year-old professional gamer known for his “Fortnite” skills, posted a video saying, “I have been holding onto this for quite some time and I am just super excited to let everyone know that I will be streaming on Mixer full-time now.”

Ninja added that he looked forward to seeing all of his followers on the new platform. On Twitter, he has 4.6 million followers. As of May 2019, he had over 14 million Twitch followers and an average of over 40,000 viewers per week.

Even a fraction of those followers downloading Mixer would result in a spike for the app … which is what happened. 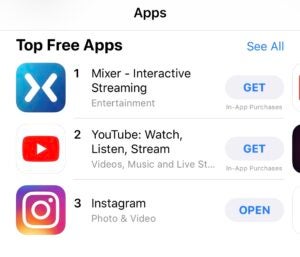 “Over 100k subscribers have been redeemed so far on mixer! Don’t forget to head over now and redeem your free sub after signing up,” Ninja tweeted Thursday night after his announcement.

Representatives for Microsoft and Xbox did not immediately return request for comment.