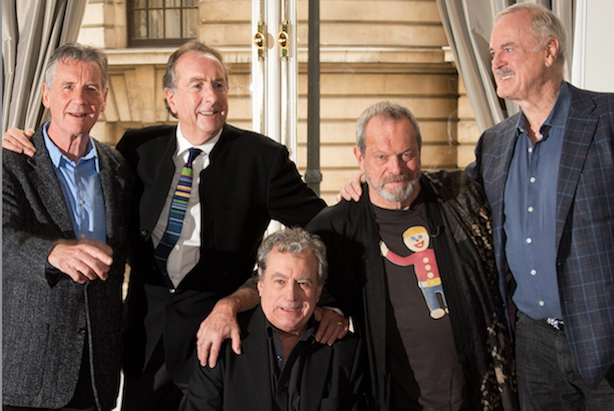 Monty Python will reunite at London’s 02 arena next July in a stage show that will revive old bits such as the legendary “Dead Parrot” sketch, as well as include new material.

The five surviving members of the “Flying Circus” — Michael Palin, Terry Gilliam, Eric Idle, Terry Jones and John Cleese — announced that they were getting the band back together at a press conference on Thursday and hinted that there may be additional performances if the demand is there. Tickets will be available for between $44 to just over $150.

“We’re advertising it as only £300 cheaper than the Rolling Stones,” Idle joked.

Graham Chapman, another member of the original troop, died of cancer in 1989.

“We’ll miss Graham quite a lot” Idle said. “But he will be there. We have told him we’re going to be on, and if there is a God then he’ll show up.”

The Pythons haven’t appeared on stage together since 1998.

Cleese said they had weighed the merits of doing another film together in the spirit of previous cinematic satires like “Life of Brian” and “The Holy Grail,” but said that scheduling logistics made that impractical.

The Pythons also indicated that they recognized that there was a great appetite for reviving more familiar bits, so they were cognizant of the need to revisit some of their greatest hits.

“It’s a very difficult decision to take because I remember going to the Royal Albert Hall and seeing Neil Diamond where he got booed in the second half for singing new numbers,” Cleese said. “People really do want to see the old hits, but we don’t want to do them exactly in a predictable way.”

“None of Neil Diamond‘s new material will be in the show,” Gilliam promised.

Watch the full press conference courtesy of the Telegraph: