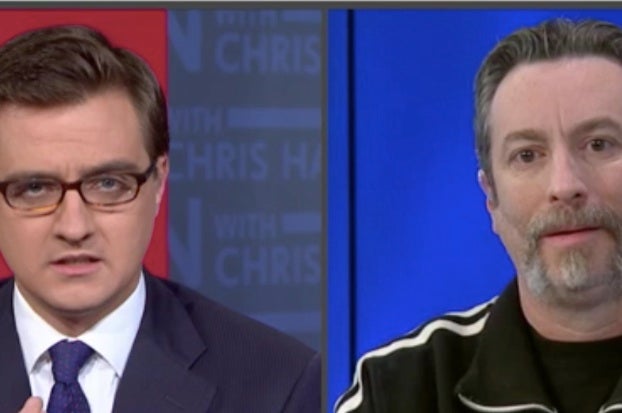 While facing a lot of heat on social media and beyond, Chris Hayes is still all in on his Wednesday interview with a member of the KKK.

Hayes spoke to Frank Ancona, a member of the “Traditionalist American Knights of the KKK” who self-anointed himself as the group’s “Imperial Wizard,” on his MSNBC show “All In with Chris Hayes.”

Ancona and his group have been distributing flyers throughout St. Louis, Missouri in the buildup to the grand jury decision in the Michael Brown case.  These are not your mom and dad’s PTA handouts — no, the flyers read “attention to the terrorists masquerading as peaceful protestors, you have awakened a sleeping giant.”  They also say the group will use lethal force to protect themselves and police officers.

Hayes’ interview with the wizard of the KKK didn’t last long — just shy of four minutes — as he wrapped the segment after Ancona suggested he’s been talking to St. Louis law enforcement “off the record” before admitting it’s actually his friends who have spoken to the police. He then threw in a rape reference.

“I knew some, even many of our viewers, would not like it,” Hayes told TheWrap.

Even with much social media brushback, Hayes wouldn’t do anything differently, telling TVNewser:

I still think it was the right call, in fact I may even feel that *more* strongly than I did last night. That said, I 100 percent understand why some people don’t see it that way. We debated and wrestled with whether or not to do it and weighed the pros and cons and ultimately decided there was real news/journalistic value in putting him on. I’ve seen some people say we shouldn’t have “given him a platform.” But I don’t view that kind of interview as “giving him a platform.” There are different kinds of interviews we do on the show. One kind of interview is a reportorial interview with people who are principles in a news story, which is what that interview last night was. That’s as opposed to interviews we do where we ask someone to comment on or weigh in on a news story. In those cases, I think you *do* inevitably invest the commentator with some authority or legitimacy, even if you don’t agree with him. And clearly we would never ever have a Grand Wizard of the KKK onto the show to play *that* role.

An insider familiar with the show told TheWrap there are currently no plans to do a follow-up on-air Thursday night — but that can of course change.

“Watch the segment from Wednesday below.