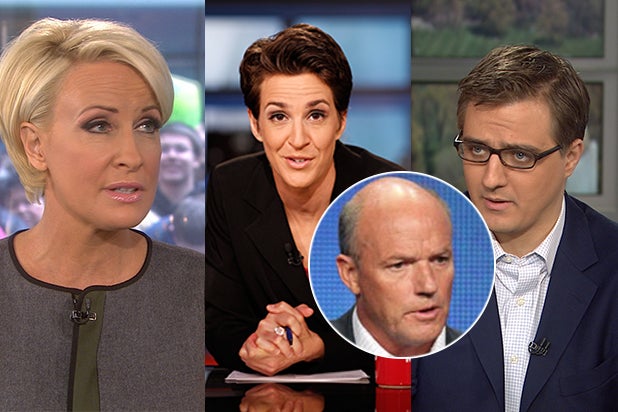 After a tough year for his network, MSNBC President Phil Griffin urged staff to look at 2014 as a learning period for the network that will help it going forward.

In a year-end memo obtained by TheWrap, Griffin acknowledged 2014 was not the best of years.

“It’s no secret that 2014 was a difficult year for the entire cable news industry and especially for MSNBC,” Griffin wrote. “Technology is continuing to drive unprecedented changes across the media landscape – and we all should be taking a hard, honest look at how we need to evolve along with it.”

Griffin also expounded on sending the network out “on the road” and outside of Washington, D.C.; as TheWrap exclusively reported in November, to combat poor ratings, Griffin has embarked on a plan to steer away from too much political punditry, opting for an increase in original reporting on MSNBC.

As we get ready to ring in 2015, I wanted to share my thoughts on the past year and the great opportunities that lie ahead for us.

It’s no secret that 2014 was a difficult year for the entire cable news industry and especially for MSNBC. Technology is continuing to drive unprecedented changes across the media landscape – and we all should be taking a hard, honest look at how we need to evolve along with it.

But these changes and challenges are a good thing for news consumers and for msnbc. They will push us harder to innovate and create fresh content that will appeal to our current audience and attract new ones. They will drive us to continuously seek out exciting talent, with different areas of expertise and perspectives. And they remind us to stay true to what we do best: covering the issues that matter to all Americans, advancing the conversation, and finding the stories that celebrate the unique spirit and strengths of our country.

Now, this kind of growth won’t happen overnight and in many ways 2014 became a critical learning and investment period for us. That’s an important thing – we got a chance to see what worked well, what didn’t, and absorb it. And I’m very proud of our entire team, and how we navigated these larger, tough dynamics. Thanks to your tireless work, we are finishing the year in a much stronger position than many might have expected:

· For the fifth consecutive year we are the number two cable network in prime for total viewers, and on a weekly basis, audiences are continuing to choose our hallmark programs, including Morning Joe and The Rachel Maddow Show, over CNN. We’re going to keep striving to improve on these numbers by every measure.

· Since launching our digital home just over a year ago, msnbc.com has seen tremendous growth. To date, our total views have grown by 94 percent. Our unique visitors have grown by 288 percent, and at a time when everyone is more distracted than ever, our audience wants to spend more time with us – our average videos watched per visit has grown 52 percent.

· We continue to have the most diverse audience in cable television and were the only network to see our Hispanic audience increase over the past year. In fact, in 2014 msnbc become the top-rated cable network for Hispanic viewers 25-54 during Monday-Friday primetime – growth that is especially crucial as we gear up for the next presidential election. For the fifth consecutive year, we were the number one cable network for African-Americans in demo and total viewers. Our African-American audience is double that of CNN’s and more than seven times that of Fox News.

· In just the past few months alone, we’ve taken bold steps to become a more integrated and nimble organization by launching the Bridge, which is already dramatically improving our ability to drive content across all platforms, and Shift, our new venture into digital programming that is already allowing us to reach new, younger audiences on a wide range of topics and experiment.

· We broke new ground by launching a multi-platform partnership with the Global Citizen campaign, showing what’s possible when we team up with an organization like the Global Poverty Project to shine a light on causes that are important to the msnbc community and empower them to make a difference. Together, we created new original reporting and content, which included special in-depth reports from the field and interviews with celebrities active in work to end poverty, and produced the first live broadcast of the Global Citizen Festival concert in Central Park. This first venture proved to be a very successful model for combining inventive programming, events, and sponsorships to raise awareness for causes that reflect our audience’s values and we’re going to expand on it moving forward.

· We have a long history of finding and nurturing great talent – and with an eye toward 2016 – we continued to build our next generation of top-notch journalists, across all platforms. In just over a month into his new show, Jose-Diaz-Balart is already getting recognized as Mediaite’s Best New Hire of 2014. As part of his interest in in-depth reporting, Ronan Farrow recently launched a new investigative series with a look at how hospitals have put veterans at risk through faulty procedures. Since joining us as a political reporter in September, Kasie Hunt has quickly shown she’s a force heading in the next election cycle, after breaking major news across the campaign trail in our “States of Play” series. Alex Seitz-Wald joined our reporting team at msnbc.com, adding to the incredible work already being done by Irin Carmon – who was also named one of the year’s best pundits – Trymaine Lee, Benjy Sarlin, Suzy Khimm, and many more.

All of this progress is a down payment on 2015 – and a preview of the direction we’re heading.

We’re going to get on the road – and outside of Washington – a lot more. We’re going to keep opening up our aperture, while investing in original reporting on the broad range of stories that move and inspire Americans. And we’re going to use new technologies, events and creative tools to engage and mobilize our passionate audience.

You can expect more announcements in the New Year – but I believe this next chapter is an enormous and exciting opportunity for us. I wish you and your families a very Happy New Year and let’s get ready for a great 2015.