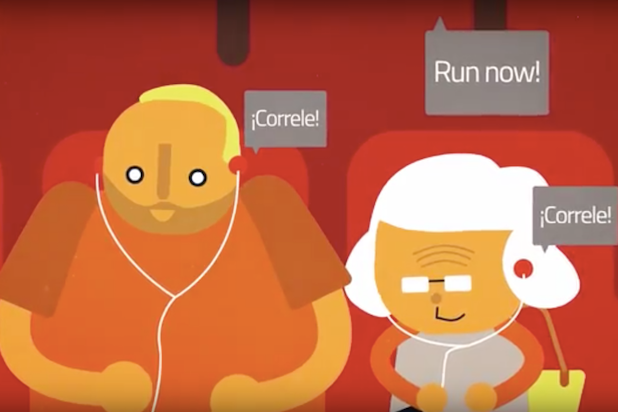 Want to watch Disney’s “Moana” in Spanish? Just download the myLINGO app to your smartphone before the opening credits roll and pop in your earbuds as you watch the animated hit at your local theater.

myLINGO users can now watch first-run Disney, Paramount and Sony films in Spanish, the company announced on Wednesday. It’s an innovation that could help grow Hispanic moviegoing audiences who spent $2.5 billion at the box office in 2015 alone (according to the MPAA).

“I set out to make an app that allows for anyone to watch a movie in any theater and in any language,” said Olenka Polak, co-founder and CEO of myLINGO, who told TheWrap she plans to add more language options to the app in the future.

The app works by playing studio-recorded Spanish audio tracks that sync to the corresponding English language film on screen while users listen in real-time using their own headphones.

The app is all set for this holiday season translating titles such as “Moana,” “Office Christmas Party,” “Rogue One: A Star Wars Story” and “Passengers.”

It uses the microphone on a viewer’s smartphone (currently available for iOS) to “listen” to a film’s audio soundtrack once the movie has begun, using a proprietary algorithm and incorporating audio tracks that have already been studio-sanctioned for Spanish versions made for international audiences.

According to myLINGO, third-party translation services tend to be clunky, but their own audio tracks ensure fidelity to the movie creator’s intended vision.

Once the movie is over, the file self-deletes from a user’s phone. It shows up dimly lit on smartphones and transitions to a completely black screen once synced to avoid interfering with others’ enjoyment of the film.

“Our research shows that nearly half of all Spanish-dominant Americans avoid going to the movies because films aren’t shown in Spanish,” said Polak. “myLINGO addresses that challenge as a partner to both studios and exhibitors, with an innovative way to drive new customers and revenue,” she added.

The myLINGO app is free to download from the iTunes app store, and each movie soundtrack usually costs $1.99 exclusively through the app. Like a movie ticket, the myLINGO movie audio track is a 1-time listen-and-view, Polak told TheWrap.