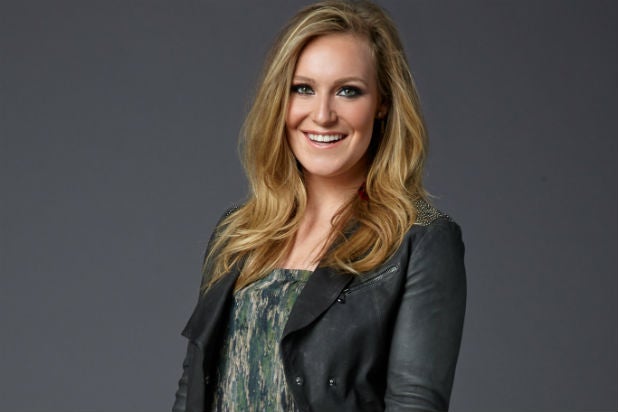 As bad ass as nine-time Olympic gold medalist Jamie Anderson is, it couldn’t save her from being fired Monday night by Donald Trump on NBC’s “The Celebrity Apprentice.”  And she blames “Real Housewives” diva Kenya Moore for her downfall.

“Kenya totally got in my head, instead of being strong with the decision I made, I second-guessed myself and that was probably Kenya’s plan all along,” Anderson told TheWrap about backtracking on who to put up for elimination.

“[The show] made me realize how much I value treating people good and having positive people in my life,” she said. “I have compassion for Kenya and Brandi, and it’s easy to get caught up in the bullshit. They act like they don’t like it, but they love it. They live for it.”

Host Donald Trump booted the Olympian for indecisiveness and later NFL wide receiver Terrell Owens was bounced, as well. It’s not an elimination the 24-year-old holds a grudge about. She agrees with his decision.

TheWrap spoke with Anderson Tuesday her show experience, redemption and not wanting to be like host Donald Trump as the 14th season of the series continues.

TheWrap: Do you agree with Trump’s decision to let you go?
Jamie Anderson: Um, yeah. I was down to go. Once I realized that I had wished I had brought Brandi back and I was indecisive about that… [Donald Trump] saw the indecision, and it made it easier to let me go. I don’t know how much more I could have lasted with the cattiness. I wanted to get back to the mountains and the real people… That particular cast was really, really challenging to be around.

Would you come back to “Celebrity Apprentice”?
Oh yeah, I would come back for sure. I kind of want redemption after the last boardroom.

Who gave you the biggest headache on the show?
I’d have to say Kenya. I don’t want to talk shit. It was really hard to be around her. She was really mean, straight-up mean. I haven’t been around people like that. It kind of breaks my heart, because I want people to be happy.

Who else do you think should leave?
Kate [Gosselin] kind of blew it, and she didn’t do much either. I thought he would fire her. And she took forever on the shopping mission when we needed her help. Like “Kate, you suck.” [laughing]

What do you take away from your short time on the show?
I think it was a once in the lifetime opportunity. I took away how I treat people business wise, personally… and what I want to attract in my life. It was cool to see that [you] can have all the money in the world and still be unhappy and an asshole. It doesn’t inspire me. I don’t want to be like Donald Trump or anything like it… I’m different than some people.

Who do you think will win?
The first people I thought that had a good chance were Keshia [Knight Pulliam] and Kevin [Jonas]. They had backgrounds in business, and they were the first ones to go. After being on the show a little longer, I think Sig; he’s a boss and really smart. And I love Leeza.

Where can fans see you next?
I have X games next week. And I’m going to be filming a video, an all women’s project of exploring the mountains and being a professional snowboarder, called “The Full Moon.”