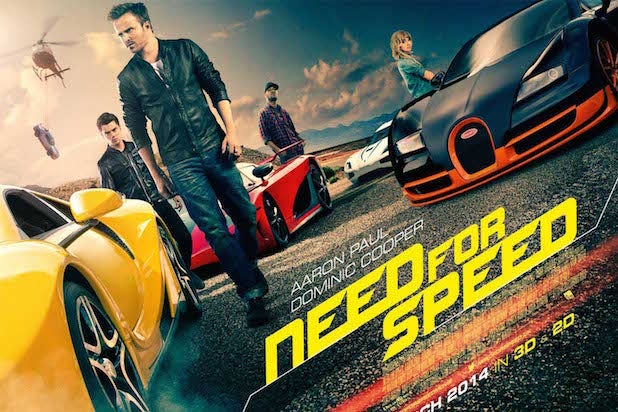 “Need for Speed” may have had a bumpy ride in U.S. theaters last year but it was a runaway hit in China, where three top production and finance companies have announced plans for a sequel that will be developed as a co-production between China and the U.S.

Joint venture partners China Movie Channell Program Center, Jiaflix Enterprises and 1905 Pictures are teaming with Electronic Arts, the publisher of the hit “Need for Speed” video game series, on the sequel to Scott Waugh‘s action-thriller “Need for Speed,” which starred Aaron Paul, Dominic Cooper, Imogen Poots and Michael Keaton. There is no director, no writer and no actors attached, as the creative team for the film will be announced in coming weeks, with production anticipated to begin later this year.

As an official co-production, much of the sequel would be filmed in China with significant Chinese talent. The film is being packaged by UTA, which represents Electronic Arts.

Also Read: ‘Goldbergs’ Star Jeff Garlin Trashes ‘Need for Speed’ on ‘Conan': ‘So Bad That I Was in Awe’ (Video)

“Need for Speed” grossed $200 million worldwide, though the film earned more than $65 million in China. Taking that success into consideration along with the worldwide popularity of the “Fast and Furious” franchise, which also features racing, a sequel makes some sense — as long as the budget can be kept in check.

EA’s “Need for Speed” franchise has been popular with gamers worldwide for more than 20 years, having sold over 150 million units and grossed over $4 billion in retail sales.  This year will see the release of both a new console game and new mobile game in the franchise.

Joint venture partners China Movie Channel, Jiaflix and 1905 Pictures most recently teamed with Paramount Pictures in last year’s top-grossing movie “Transformers: Age of Extinction.”  The Beijing-based venture was involved in the film’s production as well as the design and implementation of the China marketing, anti-piracy and grassroots programs that resulted in record-shattering box office.  “Transformers: Age of Extinction” grossed more than $300 million in China, smashing the previous record by more than 40% to become the most popular movie in China’s history.

“We are excited to work with EA, one of the world’s most recognized creative companies. We are also delighted that much of ‘Need for Speed 2’ would be filmed in China, and we believe it will include much more Chinese talent and elements,” said Yin Cao, chairman of China Movie Channel. “This venture is another great endeavor to bridge the cultures between China and the West through films. We look forward to cooperating with excellent films and filmmakers to thrill and entertain movie lovers internationally with more outstanding films with Chinese labels.”

“We expect this partnership, which brings together a winning brand like ‘Need for Speed’ with the team that propelled ‘T4’ to unprecedented success, will create one of the next great franchises for movie fans around the world. We look forward to bringing our market expertise and execution strategies to the project to accelerate demand and drive box office performance in China,” added Jiaflix president Marc Ganis.

A subsidiary of and fully funded by China Movie Channel and 1905.com, 1905 Pictures is involved in many areas of the film industry including development, production management, co-production, marketing and distribution. Earlier this year, the company acquired the Indian film “Happy New Year” and launched it in theaters across China. The release was significant as it was the first film imported under the Indian-China film treaty signed last year.