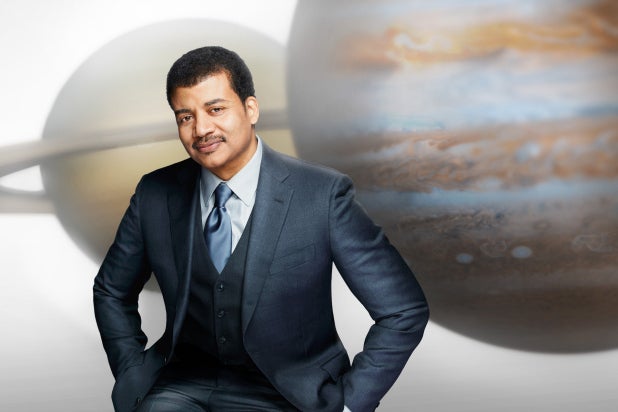 Fox and Nat Geo’s “Cosmos: A Spacetime Odyssey” somewhat quietly set an Emmy nomination record this year, nabbing 12 nods out of 13 categories for which it was submitted — the most ever for a docuseries.

The educational science show itself was anything but quiet and surprisingly entertaining — though perhaps not entirely shocking considering it was revived by “Family Guy” creator Seth MacFarlane. Plus, host Neil deGrasse Tyson made one of the best academic-turned-TV-host transitions in recent memory.

TheWrap had a quick chat with Tyson as he looked back on a successful TV season and forward to the upcoming awards one.

TheWrap: What was the toughest thing you had to do this season?
Tyson: Learning how to read the teleprompter as though the words were coming to me on the spot. For timing, editing, and  precision of communication. Actors do this with scripts. But I am fundamentally an academic, interloping in the world of television production. So this was quite a challenge for me, using two or three voice coaches to make it work. But I’m quite happy with the product.

What was the most fun thing you had to do this season?
Imagining the entire universe — large and small — passing by me on a green screen while on the deck of the Ship of the Imagination looking out its windows.

Let’s assume that somebody has never seen your show. What would you say to persuade them to watch it?
Watch “Cosmos” and be reminded that deep within you burns a flame of curiosity and wonder.

What was the last TV show you binge-watched? How many episodes did you see in a sitting?
“Star Trek: The Next Generation.” At the fitness center. On the elliptical machine. First season.

Which episode did you pick as your Emmy episode and why?
Episode 1. It introduces all the important themes and concepts of the series, and invokes most of the visual vocabulary used for storytelling that would appear in the rest of the 13 episodes.