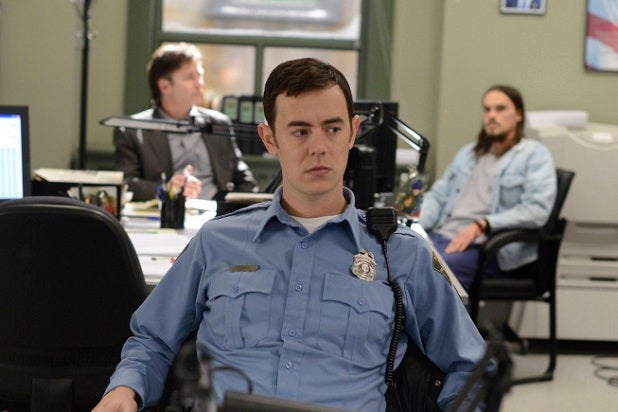 FX’s adaptation of the Coen Brothers’ “Fargo” racked up an impressive 18 Emmy nominations in its maiden run, including one for Colin Hanks, who scored a nom in the Outstanding Supporting Actor in a Miniseries or Movie for his portrayal of courage-deficient deputy Gus Grimly.

Hanks — who’s up against his “Fargo” co-star Martin Freeman, who earned a supporting actor nomination for “Sherlock: His Last Voyage” in addition to a lead actor nomination for “Fargo” — spoke to TheWrap about the brutal weather while shooting the series in Calgary and who he would vote for (besides himself, of course).

TheWrap: What was the toughest thing you had to do this season?
Colin Hanks: Working in the cold. Once you see the camera department wrap the camera up in an electric blanket between takes and you are only able to identify crew members by their jackets, you start to question the profession you have chosen.

Also read: 5 Questions With ‘So You Think You Can Dance’ Host Cat Deeley: Emmy Nominee Quickie

What was the most fun thing you had to do this season?
Working with such an amazing group of extremely talented actors who not only made the job easier but also were a joy to work with.

Let’s assume that somebody has never seen your show. What would you say to persuade them to watch it?
I would say, “Have you seen the movie ‘Fargo’? It’s like that. Except all new characters, all new story, and about 8 hours longer.”

Say you’re an Emmy voter, and you can’t vote for yourself or your show. Who’s at the top of your ballot?
In my category, it would only be fair if I voted for that Martin Freeman guy from “Sherlock” and hoped to hell he returned the favor.

If you could play any other role on any other show, what would it be?
I am going to cheat here and say that I wouldn’t want to play someone else’s role, because then I wouldn’t be able to enjoy the performances of the actors that I truly love. That said, it would be fun to play a role on a number of shows … I could list them all, but how much time do you got?

What was the last TV show you binge-watched? How many episodes did you see in a sitting?
I binged the first 5 episodes of “True Detective” and I thought my heart was going to explode. That was sandwiched between the first and second seasons of “House of Cards” … after all of that I called my doctor and scheduled a check- up.

Is this the Golden Age of Television?
THE Golden Age? I don’t know. A Golden Age? Possibly. The Bronze Age? Absolutely. There is a lot of Bronzer being used around town.