Universal Pictures has unveiled a brand new trailer for Jordan Peele’s new original thriller “Nope,” but if you’re already sold on the film and ready and waiting to buy tickets, you might want to sit this one out.

Until now, the marketing for “Nope” has been gloriously vague, only revealing so much about its characters and setting while keeping its primary plot firmly under wraps. That changes with this new trailer — or at least, we think it does. Knowing Peele, “Nope” still has a number of surprises up its sleeve, but this new look at the film certainly contextualizes a bit of what’s happening in this so-called “horror epic.”

We’ll keep the plot out of the official description here, only noting that the story concerns a Black-owned ranch in California run by a pair of siblings played by Keke Palmer and Daniel Kaluuya.

This is Peele’s third film as a writer-director following his Oscar-winning debut “Get Out” and his creepy follow-up “Us,” which starred Lupita Nyong’o. Each film has been described as a “social thriller,” packing rich thematic meat inside a horror exterior. We expect “Nope” will be no different.

So if you so choose, watch the brand new “Nope” trailer in the video above. The film — which was shot by cinematography Hoyte van Hoytema on large-format film, opens exclusively in theaters on July 22. 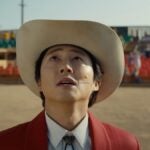