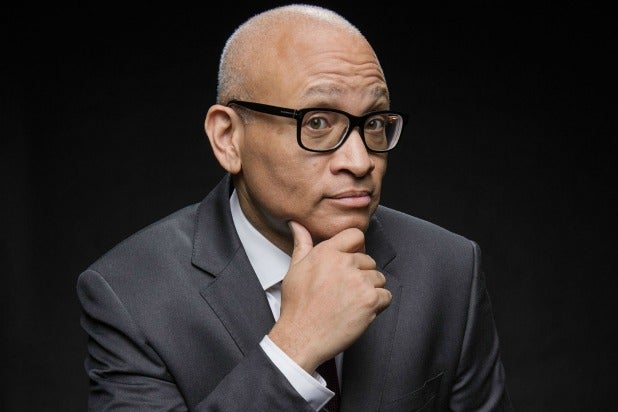 “The Nightly Show With Larry Wilmore” was once titled “The Minority Report,” but then Fox ruined that by ordering a pilot for its own show of the same name, a sequel to the 2002 Tom Cruise–Colin Farrell movie.

Before the “Colbert Report” replacement settled on the final name, Wilmore and his writers had a few other frontrunners, they told TheWrap.

One proposed title was “Meet the Rest,” a play on NBC’s “Meet the Press” — the somber counterpart to Wilmore’s Comedy Central show. Ultimately, Wilmore passed on that moniker, explaining that it sounded too much like a “Saturday Night Live” skit.

Another possibility was “The Wilmore(t) Report,” with two hard “t’s” — the first first being an invisible one. That option was an inverted play on “The Colbert Report’s” silent “t’s” — but that didn’t pan out either.

So instead, “The Nightly Show” debuts Monday evening at 11:30 p.m. on Comedy Central — and Wilmore is quite satisfied with the settled-upon title.

For starters, once “The Minority Report” was ruled out, Wilmore realized he no longer has to be concerned with people thinking the entire show is about race, e.g. asking him: “I thought you were ‘the black show’?” he said.

“We don’t have to say what our show’s not. All we have to worry about is saying what it is,” he explained.

While everyone internal to the production likes the title, not everyone was particularly impressed by it. Wilmore’s boss, Kent Alterman, was actually angry at his newest star over it.

“He said, ‘How dare you come up with such a simple name?'” Wilmore recalled.

Also Read: ‘Community’ Creator Dan Harmon Not Writing Season 6 ‘As if It Were the End’

But it’s got the goods, at least from a marketing perspective, Wilmore said — and the notoriously funny executive Alterman has to appreciate that.

“In terms of a brand I think it’s fantastic,” Wilmore said. “It’s something that I know, from [ point of view, can stay in there, even without me, forever. I mean Jon [Stewart] didn’t even start ‘The Daily Show.'”

“The Nightly Show” is going to be chock-full of “nightliness,” its promos implore us. Wilmore told us what that means: “Nightliness” is a combination of Wilmore’s own brand of silliness, and his “keeping it 100” attitude, he explained.

Plus, “nightliness” makes for an easy hashtag, so that helps in the 2015 environment Wilmore inherits. That’s one less problem for the host/executive producer, who at the time of our interview was scrambling to get his studio and team ready to premiere on Martin Luther King Jr. Day. He had real concern in his voice about how ready they were from a logistics standpoint.

“It’s ridiculous,” he said. “My producer side is in panic mode. My performer side wanted to do it in September.”

But the show must go on, so it will. And when it does, there will be just one other obstacle: The little, teeny-tiny, practically microscopic issue of the ghost permeating his timeslot — the great Stephen Colbert, who packed up for CBS late last year.

“You really don’t follow Stephen,” Wilmore said of the unnaturally high expectations. “You just do your own thing and you find your own voice and you establish your own relationship with the audience and you build your own fan base.”

“Rather than following Stephen, I’ll be up against Stephen — how about that?” he added, pointing out the overlap in their timeslots. “I consider that more daunting than following something he’s not doing anymore.”

“The Nightly Show With Larry Wilmore” debuts Monday at 11:30 p.m. on Comedy Central, immediately after “The Daily Show.”