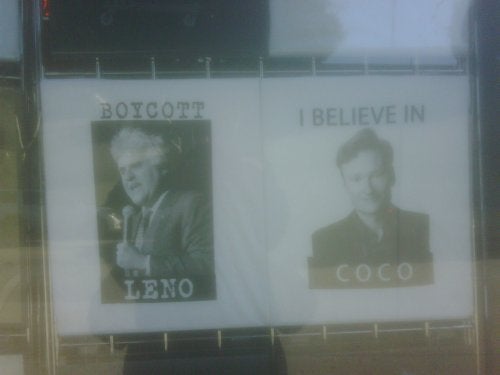 Known for jumping on pop culture moments quickly, Y Que has wasted no time designing its way into the late-night war. It’s offering customers of its Los Feliz store a choice of two shirts that riff on the mess — though both styles seem to favor Mr. O’Brien’s side.

You can show support for Conan with the upbeat "I Believe in Coco" shirt. Or you can express your feeling in a more negative manner: "Boycott Leno." The latter shirt has a very scary image of Leno, by the way.

The shirts are selling for $13 each, or $40 for three. The store’s located at 1770 North Vermont Avenue.  If you’re not in LA, you can order your shirt online here. It’s actually cheaper ($13), but you’ll have to pay for shipping.

Not surprisingly, other pro-CoCo shirts are popping up online as well. Busted Tees has its own design here.  There’s a scad of them located here.  And one fast-moving Conan fan has even printed up a design with O’Brien’s "don’t by cynical" speech on the front. It’s located here.

For those who are really upset at Mr. Leno, you might find some therapy in this shirt design. It’s definitely not safe for work.