Now that NBC has made it clear it plans to put Jay Leno at 11:35 p.m., the odds are 50/50 at best that Conan O’Brien will decide to stay at NBC, a person familiar with the O’Brien’s camp thinking said. 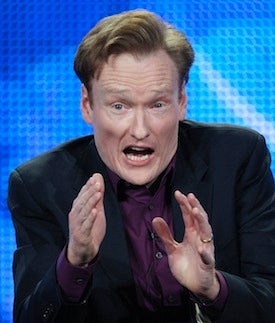 O’Brien and his team are taking the weekend to mull their options and to recover from the shock of the last 72 hours. While Team Conan always knew there was a chance moving to "The Tonight Show" would not work out, nobody expected NBC to abandon O’Brien so quickly and completely.

While it’s possible there could be a decision early during the coming week, most insiders around Hollywood believe O’Brien isn’t going to rush a decision.

O’Brien and his representatives — including WME and manager Gavin Polone — have so far maintained a strict radio silence about Late Night Crisis 2010. But it’s probably safe to assume that O’Brien was left utterly stunned and angered by recent events.

The challenge now: getting beyond those emotions and figuring out what’s best for O’Brien and the hundreds of loyal staffers on his show, including longtime executive producer Jeff Ross.

As for the options in front of him, a source close to the O’Brien camp said that while NBC has not explicitly said Leno will be moving to 11:35, the network has made it clear that’s the plan — and left O’Brien’s reps with the impression that, if forced to choose between O’Brien and Leno, it would choose Leno.

Now, O’Brien has to decide whether to accept NBC’s clear betrayal of trust and stay with the network at 12:05 a.m., find a home elsewhere (including possibly a cable network) or simply leave late-night altogether while figuring out his next career move.

That last option is seen as highly unlikely by industry insiders. Whether O’Brien decides to move or stay could well depend on what other offers, or overtures, come his way in the next few days — and whether NBC decides to make its shabby treatment of O’Brien complete by trying to enforce a non-compete clause in his deal.

Fox has made it clear it likes O’Brien but, at least for now, is playing it a bit coy about its intentions. ABC has expressed support for current host Jimmy Kimmel, but it’d be foolish to completely take the network out of the running.

Industry insiders also believe other networks — maybe TBS or FX? — might be interested in O’Brien, but there’s no word of any firm overtures being made.

Team Conan might also do well to consider the fact that the TV landscape is expected to change even more dramatically over the next five years than it already has recently. The whole concept of "timeslots" could soon be irrelevant as TVs with built-in Internet apps — a big hit at last week’s CES — make viewing on-demand the order of the day.

If that’s the case, if O’Brien can get over the major trust issues raised by NBC’s one-finger salute, a later timeslot might not be such a big deal. O’Brien could do the show he wants while possibly seeing his fan base expand as more viewers learn how to watch TV on their own schedules.

With new owner Comcast, it’s also easy to see an array of on-demand and digital options being offer to O’Brien. While affiliates might not like it much, it doesn’t seem much of a stretch to see NBC offering cable customers the chance to watch O’Brien’s show on-demand a half-hour before it airs on NBC.

HBO and Showtime have already experimented with giving on-demand customers advance screenings of shows. In exchange for getting rid of the 10 p.m. Leno cancer, perhaps NBC could extract concessions from affiliates giving up their exclusivity.

(Advertisers, however, might be less happy about the concept).

Such geeky concepts might not be of much interest to a comedy traditionalist like O’Brien, however. For folks like him, Leno and David Letterman, there’s still a sense that 11:35 — the hallowed Johnny Carson timeslot — is the end all, be all of late-night success.

Then there’s the whole trust issue.

O’Brien and his camp had responded calmly last December when NBC surprised them with the news that Leno would shift to 10 p.m. once O’Brien took over "The Tonight Show." Even though they feared such a plan would dramatically hurt their lead-in, they played ball with Zucker.

Now that "The Jay Leno Show" failed, NBC has decided not to simply move on from a botched primetime experiment, but to try to have its cake and eat it too — eliminating the 10 p.m. headache of a comedy show that didn’t work, while keeping Leno at NBC by displacing O’Brien.

If NBC could so easily decide to just go back on its past promises to O’Brien, what’s to stop the network from changing its mind again. An 11:35 p.m. Leno show, even if it begins as a half-hour, could be expanded to an hour at some point in the future, leaving O’Brien right back where he started 17 years ago.

Indeed, last week’s events have also no doubt raised questions inside O’Brien’s team about whether NBC ever had any intention of giving O’Brien a true shot at finding an audience at 11:35. The network stood by Leno during his first two years on "Tonight," when he lost a chunk of Johnny Carson’s audience and fell behind David Letterman.

Yet, interestingly, while O’Brien’s demo numbers are down from Leno’s reign, "Tonight" and "Late Show with David Letterman" remain in a close race among the only metric NBC claims to care about: adults 18-49. This, despite the fact that NBC’s woeful 10 p.m. performance has caused numerous NBC affiliates (and owned stations) to experience dramatic ratings declines.

In New York, Peacock flagship WNBC finished a distant third at 11 p.m., while long-time loser WCBS ranked first, according to a report in the New York Observer. Such a disaster in O’Brien’s long-time hometown makes it hard to see why NBC thinks O’Brien is to blame for the bulk of his ratings declines.

The irony now, of course, is that if Leno returns to 11:35, he’ll likely have better lead-ins — assuming that scripted dramas or other stunts hatched by NBC do better than the 10 p.m. version of "The Jay Leno Show." It’s hard to see how they wouldn’t.

(Follow Josef Adalian on Twitter via @tvmojoe for live updates from TCA and the latest Leno-O’Brien news).