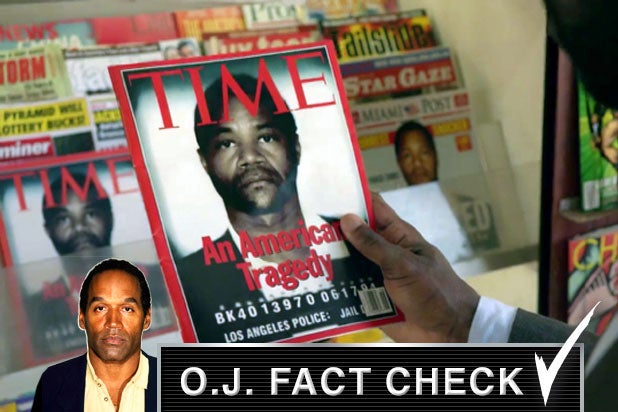 (Spoiler alert: You may not want to read this yet if you haven’t watched Tuesday’s episode of “The People v. O.J. Simpson.”)

On tonight’s “The People v. O.J. Simpson,” prosecutor Chris Darden picks up a copy of Time magazine to discover, in horror, that its cover has darkened Simpson’s complexion in his mug shot. It’s all the more obvious because Newsweek, sitting beside Time on the rack, has used the original mugshot for its cover.

“Pretty crazy, huh?” the African American man working at the newsstand says. “They made him blacker.”

Did they really? Yeah, they did. Welcome to the third edition of O.J. Fact Check.

WHAT? NO.
Yes! And it was super obvious. This was a huge deal in June 1994, because magazine covers mattered more than they do now. When both Time and Newsweek put the same person on their covers in the same week, it meant that person was a big deal.

The cover has been criticized and discussed in newspapers and on television as well as in dozens of electronic messages on America Online. America Online, a national bulletin board with 800,000 subscribers, carries an electronic version of Time magazine.

THE POINT OF THE SCENE
“The People v. O.J. Simpson” points to the cover illustration as one of the first moments in which the Simpson case became about race, as critics of the cover said that it outrageously linked dark skin color and a propensity toward violence.

As the episode illustrates, Simpson’s attorneys were able to turn the suggestion that the former NFL star was a victim of racial discrimination into one of the best weapons in their arsenal.

THE FACTS
As Jeffrey Toobin notes in “The Run of His Life,” which provides the basis for the FX series, Time enlisted artist Matt Mahurin to make a photo illustration of Simpson’s mug shot. (Until the LAPD released the mug shot at 2 a.m. on a Saturday, Time had considered using a painting of Simpson on its cover.)

So how did Time end up making Simpson blacker? Time needed 874 words to explain it was trying to raise a mug shot “to the level of art.” You can read its full explanation below.

THE VERDICT
Today, pretty much anytime a journalist considers darkening a photo for any reason — to make the text stand out, to be artistic, whatever — that journalist stops and remembers the Time cover.

ANYTHING ELSE?
Here’s Jim Gaines, who was Time’s managing editor at the time, explaining what went wrong, in a statement published in his magazine soon after the infamous cover:

Every week at Time there is at least one story that places special demands on our journalistic conscience, one decision that calls out for especially rigorous scrutiny. Sometimes the challenge is knowing which decision that is. The O.J. Simpson story presented us with one of those challenges.

That fast-breaking story taxed every journalistic resource of this magazine, from the correspondents in Los Angeles and Chicago to the reporters, writers, picture editors and art directors in New York City. All of them performed superbly in dealing with a story fraught with ethical complications — among them issues of privacy, protection of sources and the presumption of innocence. At the end of the day they produced a combination of pictures and text that was both journalistically responsible and, in terms of reportage, second to none.

Then came the decision that is in a way the culmination of every week: the choice of a cover. We had commissioned a painting of Simpson by Greg Spalenka, we had an abundance of photographs to choose from, and at 2 a.m. EDT on Saturday, the Los Angeles police department released a mug shot. We prepared all of these options as covers and at the same time decided to commission another artist’s portrait, using the mug shot as a starting point. For this assignment we turned to Matt Mahurin, a master of photo-illustration (using photography as the basis for work in another medium, in this case a computerized image). Mahurin had done numerous other Time cover portraits in the same genre, including the one of Kim Il Sung two weeks earlier.

He had only a few hours, but I found what he did in that time quite impressive. The harshness of the mug shot – the merciless bright light, the stubble on Simpson’s face, the cold specificity of the picture – had been subtly smoothed and shaped into an icon of tragedy. The expression on his face was not merely blank now; it was bottomless. This cover, with the simple, nonjudgmental headline “An American Tragedy,” seemed the obvious, right choice.

I have looked at thousands of covers over the years and chosen hundreds. I have never been so wrong about how one would be received. In the storm of controversy over this cover, several of the country’s major news organizations and leading black journalists charged that we had darkened Simpson’s face in a racist and legally prejudicial attempt to make him look more sinister and guilty, to portray him as “some kind of animal,” as the N.A.A.C.P.’s Benjamin Chavis put it. A white press critic said the cover had the effect of sending him “back to the ghetto.” Others objected to the fact that the mug shot had been altered at all, arguing that photographs, particularly news photos, should never be altered.

First, it should be said (I wish it went without saying) that no racial implication was intended, by Time or by the artist. One could argue that it is racist to say that blacker is more sinister, and some African Americans have taken that position in the course of this dispute, but that does not excuse insensitivity. To the extent that this caused offense to anyone, I deeply regret it.

Nor did we intend any imputation of guilt. We were careful to avoid that in our story, but for at least some people, this cover picture was worth several thousand words.

The issues surrounding photo-illustration, particularly with regard to news photos, are much more complex. To a certain extent, our critics are absolutely right: altering news pictures is a risky practice, since only documentary authority makes photography of any value in the practice of journalism. On the other hand, photojournalism has never been able to claim the transparent neutrality attributed to it. Photographers choose angles and editors choose pictures to make points, after all (should President Clinton be smiling this week, or frowning?). And every major news outlet routinely crops and retouches photos to eliminate minor, extraneous elements, so long as the essential meaning of the picture is left intact. Our critics felt that Matt Mahurin’s work changed the picture fundamentally; I felt it liftout that. If there was anything wrong with the cover, in my view, it was that it was not immediately apparent that this was a photo-illustration rather than an unaltered photograph; to know that, a reader had to turn to our contents page or see the original mug shot on the opening page of the story. But making that distinction clearer will not end the debate over the manipulation of photographs. Nor should it. No single set of rules will ever cover all possible cases. It will remain, as it has always been, a matter of subjective judgment.

Just for the record, the photographs in the cover story and on the cover of this week’s issue are all by award-winning photographer Donna Ferrato, a meticulous documentarian who has spent the past 13 years of her life taking pictures of domestic abuse. In this case, it is almost painful to report that none of her pictures have been altered in any way.