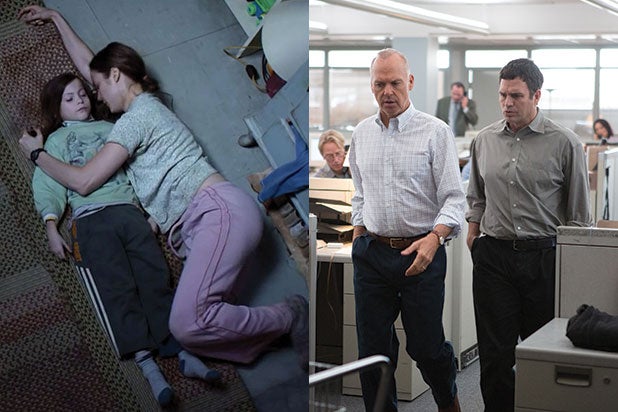 Indie houses A24 and Open Road have muscled their way to Best Picture Oscar nominations in a year that saw perennial Academy favorite Harvey Weinstein shut out for the first time in seven years.

A24’s “Room” and Open Road’s critical darling “Spotlight” accounted for two of the eight Best Picture nominees, coincidentally both about small groups overcoming oppressors — the former follows a mother and her young child fighting to break free from captivity, and the latter centers on a team of journalists taking on Roman Catholic pedophile priests.

But The Weinstein Company’s “Carol,” once considered a safe bet for a nomination, was snubbed for Best Picture — as was Quentin Tarantino‘s “The Hateful Eight.” Todd Haynes‘ period drama did secure acting nominations for Cate Blanchett and Rooney Mara and Best Original Screenplay, Score, Costume Design and Cinematography nods.

Though TWC scored 10 nominations on Thursday, it’s the first time moguls Harvey and Bob Weinstein have not had a Best Picture nominee since 2007.

That year, “No Country for Old Men” won for Miramax two years after the brothers had left the company they founded. (The previous year’s winner, “The Queen,” was also a Miramax title that the nascent Weinstein Company distributed in Latin America.)

For relatively young indie companies like Open Road and A24, the Academy recognition signaled an entry into the big leagues.

“I don’t like to get into the David versus Goliath stuff, but from an awards perspective the Academy has had an astonishingly good track record at recognizing quality,” Open Road CEO Tom Ortenberg told TheWrap.

Update: In a statement to TheWrap, TWC co-chairman and founder Harvey Weinstein said:

“Any day that you get 10 Oscar nominations is a good day.  TWC led the way in nominations for all independent studios and for that we’re celebrating.  We would have been thrilled had the Academy nominated CAROL for best picture or Todd and Quentin for their masterful directing, but CAROL’s 6 nominations and HATEFUL’s 3 nominations are both humbling achievements.”

A24’s “Room” stunned on Thursday morning by securing not only a Best Picture nomination but a nod for director Lenny Abrahamson, who wasn’t largely included in such conversations over awards season and claimed a spot many thought would go to sentimental favorite Ridley Scott for “The Martian.”

Breakout star Brie Larson, who’s a strong contender for Best Actress, and her 9-year-old costar Jacob Tremblay have been on a steady charm offensive since the film’s September release.

It’s been effective — at least on the awards front. Larson won the Best Actress Drama at the Golden Globes on Sunday, and Emma Donoghue earned a screenplay nod for adapting her own novel “Room.”

But the film has had more of an uphill battle at the box office, grossing just over $5 million to date.

In addition, A24 picked up two nods for the sci-fi movie “Ex Machina” and one for documentary feature “Amy.”

For the record: A previous version of this story stated that the Weinsteins have backed Best Picture nominees since 2005, not 2007.