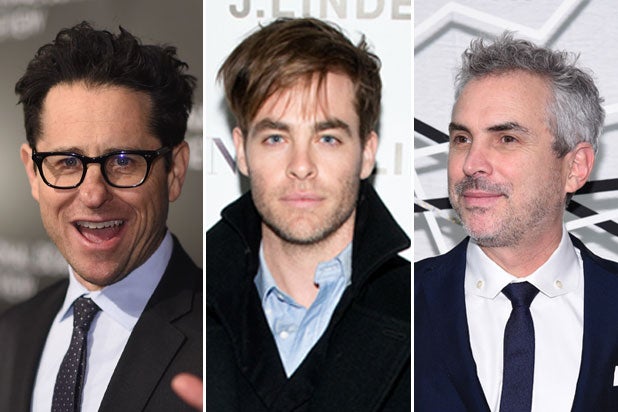 J.J. Abrams, Alfonso Cuaron, Chris Pine and Academy President Cheryl Boone Isaacs are set to present Oscar nominees in a new format, producers Craig Zadan and Neil Meron revealed on Friday. It marks the first time nominations for all of the categories will be announced simultaneously on TV.

There announcements will come in two separate waves during a live news conference at the Academy’s Samuel Goldwyn Theater in Beverly Hills on Jan. 15. Cuaron and Abrams will present 11 of the nominees at 5:30 a.m. PT and Pine and Boone Isaacs will present the remaining 13 , including Best Picture, eight minutes later.

“I think it’s just wonderful,” Boone Isaacs told TheWrap. “That morning is always so electric anyway, journalists from around the world, everyone’s all abuzz, and with this announcement, everything’s going to rise even higher.”

In addition to all the categories being announced live for the first time, getting directors involved for the announcement is also something new.

“When we decided this was something we wanted to proceed with, to expand that spotlight to include different members of the Academy, we thought that directors – especially world-class directors like Alfonso and JJ – would be able to bring a great deal of attention to categories that somehow are not as recognized as the others,” said Meron. “As directors they certainly work with every element of film, and we thought it made sense to get them involved. So we reached out to JJ and Alfonso and they instantly – much to our surprise – understood what we were trying to do and the uniqueness of the presentation.”

The Oscars will be held on Sunday, February 22, 2015, from the Dolby Theatre in Los Angeles. The awards ceremony kicks off at 7 p.m. and will be broadcast live on ABC.