When Oscar red-carpet activities kick off on Sunday afternoon, it you’re not near a TV, you can for the first time watch the proceedings live on your mobile phone, netbook or laptop. 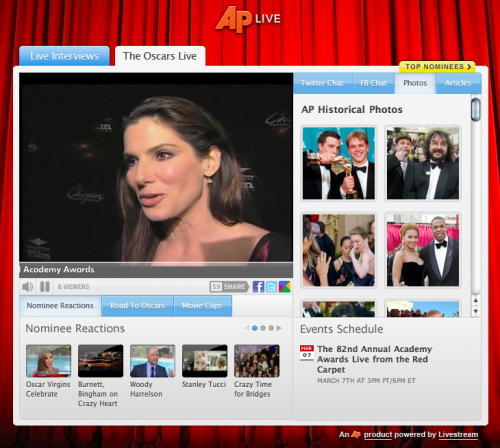 The result of a months-long collaboration between the Associated Press and video app maker Livestream, the video technology that will enable all of this is AP Live Entertainment.
Consisting of an embeddable video widget that can be accessed online, with Blackberry, iPhone and Android phone users able to tap into the feed through the mobile browser at the same web address. (The live feed will also be available on Facebook and AT&T Entertainment.)
Presiding over the live feed will be AP entertainment editor Alicia Quarles, who will troll the red carpet, from 3 to 5 p.m. PT. Other AP reporters will post updates during the awards show and throughout the after-parties, via the interactive chats on Twitter and Facebook.
After the Oscars, AP Live Entertainment will segue to live celebrity interviews, movie previews and other packaged content in addition to coverage of other, as-yet-to-be-determined live events.
“The full immersive version will include on-demand clips, photo galleries and a text news feed, the planner that gives people an idea of what we’ll be covering next, as well as the social connectivity through Twitter and Facebook,” says AP entertainment products director Michael Dutton. “It allows us to provide a persistently available channel that not only features smaller day-to-day interviews in our studios but allows us to ramp up to bigger events such as the Oscars.
AP Live Entertainment is Associated Press’ second venture into mobile, after the May 2008 launch of AP Mobile, a news app for iPhone, iPod Touch, BlackBerry, Palm Pre, Nokia and Android phones.
x
Looks like you're enjoying reading