Pat Robertson will step down as host of “The 700 Club,” a Christian-themed talk show that airs on the Christian Broadcast Network. His son, Gordon, will take over.

“Today’s show will be my final as host of The 700 Club,” the 91-year-old Robertson said on Friday’s show. “My replacement will be my very capable son, Gordon, who will take over as full-time host of the program.”

Gordon replaced his father as chief executive of CBN in 2007, while Pat Robertson remained chairman of the network. 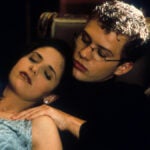 Robertson will turn his efforts to teaching students at Regent University, which he founded in 1977, and will also join in future CBN broadcasts. Next month, Robertson will appear on a monthly, interactive episode of “The 700 Club,” to answer viewer emails.

“‘Good and faithful’ doesn’t even begin to describe my father’s service to CBN for 60 years. His legacy and the example of his prayer life will continue to lead The 700 Club in the years to come,” said Gordon Robertson, who has served as co-host and executive producer of The 700 Club for two decades. “And the best part is, he is just going across the street to Regent University and will be on The 700 Club regularly in the future.”