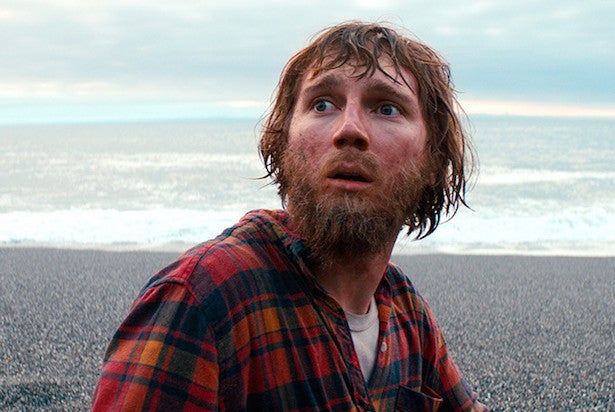 If you have watched the trailer for A24’s “Swiss Army Man,” you’ve seen Paul Dano conspicuously riding atop of Daniel Radcliffe as they speed over ocean waves.

It’s as if the former Harry Potter star is some sort of organic, magical jet ski.

But what’s propelling them? Believe it or not, it’s farts. Yes, the flatulence of a dead guy, named Manny, pushes Dano’s character, Hank, through the sea after he has found himself stranded in the wilderness.

The peculiar indie movie is the brainchild of writer-directors Dan Kwan and Daniel Scheinert, a.k.a. the Daniels. It’s not just their stage moniker that evokes a sort of director version of Daft Punk (but without the helmets). Like the famous French recording duo, the Daniels are arguably innovating.

“I think they’re wildly entertaining,” Dano told TheWrap during a recent interview. “It’s such imagination and creative spirit at work.”

As “Swiss Army Man” prepares to expand in theaters this weekend, read more from Dano on how the Daniels’ bizarre fantasy film came together.

TheWrap: This is a surreal, philosophical film. But on the surface, it’s about your character interacting with a farting dead guy. What was your initial reaction to the gassy part of the story?
Paul Dano: I was super into it. I thought it was so funny. The absurdity brought a beauty to it. I found it to be kind of glorious in it’s own way.

Radcliffe has to act like a dead guy and you have to hold him and pull him around. What were some of the bigger physical challenges in capturing that?
The transformation Daniel Radcliffe‘s character goes through physically, emotionally and intellectually is really amazing. Every day out in the woods we would be trying to figure out how I could hold and carry him up this hill. We’d try to wrap him around me so I could drag him. We’d be figuring out how to get the boner wand in his pants to work for the camera. They were all fun technical things because you knew where that time energy was headed. These two guys riding across the ocean the way they do — it’s hard to pull off. Doing it and making it real is part of the art or magic in itself. 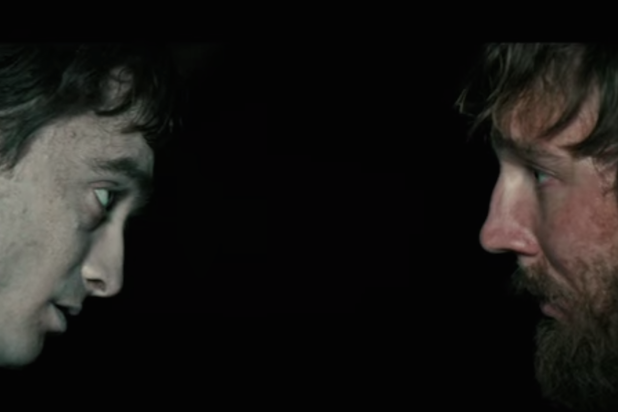 Without giving it away, you come in contact with a very real-looking bear during one climactic scene. I was reminded of Leonardo DiCaprio‘s bear fight in “The Revenant.” Was it a real bear and then a fake one in certain shots?
We used a real bear. This was the real deal. I think it’s the best bear scene you’re gonna get in the history of cinema … I’m kidding of course. That was actually a crazy sequence of film because we had a stunt guy fully light himself on fire. It was crazy. It was great. The Daniels are so imaginative and come from a background where they’ve found ways to do things themselves in camera, these wonderful effects on a small budget. It’s really interesting how they were able to pull off that sequence. There’s a lot going on there and hopefully there’ll be a fun special feature about it one day.

You and the bear come face-to-face. How did you get so close?
Well, they also were able to composite a couple of frames. We’re standing out there and a bear is standing out there. There are ways of doing it safely.

I love Hank’s line about how girls were much more special before the Internet. As much as this story takes place outside of civilization, it also comments on it.
I do feel like we’re constantly told on our devices that were connecting. But I wonder how often we are truly connecting and if, in fact, it can be more isolating. I think the film is about finding a more true, human connection. That’s a really beautiful and profound, complicated and wonderful thing. Yeah, it’s interesting that film takes place in the wilderness, but I would say it’s a very modern film.

Does that help explain why you’re not on Twitter in real life?
Some people use it in a way I actually really love and I think, OK, I wish I was [on Twitter]. Yeah, I just don’t need that. That’s all. I would have to feel like I have something to offer.

Daniel Radcliffe‘s character, Manny, teases out absurdities of modern society, do you agree?
I suppose what Manny really is — it’s a way to see the world new again. He doesn’t remember anything and my character Hank has to teach him about life and love. When you actually have to do that — because I’m not a parent — it’s a hard thing to do when you’re asked, “What is love, death, sex,” whatever. I think in the modern Internet comment age we’re very quick to judge and it’s perhaps easy to be cynical. I think Manny has a really childlike spirit. I think the Daniels do and the film does. That’s something I got from this film on a personal level — a sense of wonder, fun, pure creative joy.

Even at the end of the film, it’s hard to tell what’s real and whether what we’ve seen is some kind of a hallucination. Is Hank insane?
He’s been out there in a stranded state and he is certainly at the end of his own rope. I don’t know if I’d qualify that as insane or more really, truly lost — not just literally and physically, but spiritually. I think his plight is a common one, really. A big part of what the film is about is how shame can prevent us from loving ourselves and then being able to love and receive love from other people. Manny helps Hank via the fart metaphor to learn to love, be happy and have fun again. We all have ups and downs. If we were to look literally at the relationship with Manny, the dead body… I don’t know if I can separate myself enough to say, OK, maybe that is crazy. I’m looking at it from a different vantage point.

The music in the film builds on tunes your character hums and sings to himself. How did that come together?
I love that aspect of it. A lot of that was developed before we filmed. We had the music on set and were able to use it for inspiration or to actually sing something in the scene. That was a great gift and a truly big part of the film. The guys from Manchester Orchestra did beautiful job and the Daniels having that concept and seeing that part of the vision though — that part I was very excited about.

The film has been receiving passionate responses ever since it debuted at Sundance. We’ve noticed people seem to either love it or hate it, does that bother you?
I’m super cool with that. I feel like I’m excited to take a big swing. I think it’s a total risk and I feel super vulnerable about it in a really good way. I love it, I loved making it, and I believe in these guys. I think that it’s exciting to have a film that gets into people in either way. How much else does, really? I watch a lot of movies and there’s just a lot out there that are down the middle. I think once everybody at Sundance knew a little about what the film was, they were primed and ready to go. But I’m excited for the normal audience to see it. I love talking to people about this movie because I’m curious about it myself, still.